Fellow photography enthusiast, Neil Creek, continues his series on the topic of Organization in Photography. For more of Neil's work, be sure to visit his photography blog and subscribe to his feed.

After last week's introduction, it's time to get into the nitty gritty of organizing your images. Like most really important things, being organized isn't just a method, it's a way of thinking.

Everything you do with your images benefits from a structured way of thinking, and it works best when it happens seemlessly and naturally. For new photographers, remembering to have enough memory cards, and knowing where you copied your photos can be a challenge. For an organized photographer it's rarely an issue because the way they do things doesn't allow for such mistakes. If you make a habit of organized thinking, then organization becomes as natural as breathing.

FOLLOW THIS SERIES OF ARTICLES!
BACK — GETTING TO GRIPS WITH IMAGE MANAGEMENT
NEXT — SEEING IT THROUGH

That's all very philosophical and entirely useless without specific examples, so I'm going to walk you through my workflow and hopefully you'll be able to see from that example what I mean. I should let you know that I'm not an expert and my system is not perfect. Organized habits are hard to form, and what works for me may not work for you. Have a look at the way I do things, and see if you can adapt it to your own style.

Below are the typical steps in my workflow. Where there needs to be a further explanation, I've linked to further down in this post. Due to the detail I go into to cover these points, I'll be discussing the second half of my workflow in the next post in the series.

Sections in grey will be covered in Part 3. 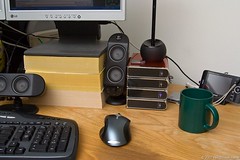 After having a hard disk drive (HDD) die, taking with it five years of photos (which I fortunately managed to retrieve years later), I swore that I would never be without backup. My current HDD setup is largely inspired by by Peter Krogh.

I have a series (currently 4) of 320Gb USB2.0 external HDDs. They are grouped into pairs, a primary and its mirror. One pair stores my RAW files, and the other stores derivative files and all my non photography data. The idea is that when the RAW disk fills, I buy another pair. Currently however, the “RAW2” disk is a subdirectory on the “DERIV1” drive untill I can afford another pair. Theoretically the DERIV disks will take a lot longer to fill than the RAW drives.

A consistent naming system is absolutely critical to any digital asset management, especially photos. Names generated by your camera contain no information about the photo, and they are not unique. Your file name could be the same as hundreds around the world, or worse, when you “go round the clock” and take enough photos to cause the camera to start re-using numbers, you could overwrite your old files.

I use a similar system for naming my directories and photos. A typical directory on my RAW HDD might look like this:

The date is very useful. In the space of just six characters I can uniquely identify any date within one hundred years. The date is read in pairs from left to right in descending order of detail. Year, month, day. The reasons for choosing this format are:

The description is simply to help me find the folder once I’ve narrowed down to the approximate date. If I know I took those milk and dye photos in January sometime, a quick scan down the directory list will find them. If the description includes relevant keywords, it’s possible to search for them with your file manager’s “find” tool. If I shoot more than one subject in a day, I just keep adding to the description, though I try and keep it under ten or so words, usually it’s only two to four.

Once I get all my photos into the day's directory, I rename all the photos. Whatever naming convention you decide to use for your photos, the most important thing is that you STICK with it. The strength of a naming system is that it is consistent. If you use more than one system, things will quickly become a jumble, and you won’t be able to confidently track your photos.

The file naming system I use for my photos is similar to the one I use for my directories. A typical RAW file might be named like this:

In the last couple of years I've started using my name as a prefix to my photo names for a number of reasons:

The rest of the file name is pretty straightforward. The date is used in the same way and for the same reason as in the directory name. The unique number is just a count, from 001 up. For especially large shoots, you could count from 0001 and up. The extension is the default RAW file type, but that will change soon enough, as I will discuss in a later point.

It’s important to note – name your photos before you do any culling. Once you’ve named your photos don’t rename them EVER, otherwise it will lead to a version control nightmare! There's nothing wrong with having a file list with missing numbers.

To rename my photos I use a great piece of Aussie software called Directory Opus as my file manager, and it includes a batch rename tool. I'll talk more about the tools I use to assist my photo organization in a later post in this series.

Metadata is an incredibly useful tool, and has been discussed in detail in many articles online, but for now a simple definition of metadata is “data about data”. This is where all the information about your photo is stored.

Photographers should also be interested in the IPTC metadata fields. Of most interest is the credit information and keywords.

Credit information is crucial for identifying a photo as the work of a particular photographer. It allows others, especially potential users of the photo, to know who took the photo. I've created a metadata preset in Lightroom that adds all my details to every photo I import.

Keywords are extremely useful for describing a photo, and later finding it. Search engines are not yet smart enough to recognize the content and context of a photo, so keywords fill the gap. Effective keyword use makes searching a huge database of images for exactly the one you want straightforward. The main problem with keywords is that it’s a lot of work to keyword hundreds or thousands of photos. Inconsistent keyword use also lessens their usefulness.

At this stage in my workflow I assign a standard credit to all imported photos, and I add a few keywords that apply to all images in the shoot. Sometimes this isn’t very easy as a shoot can be varied, but even one or two keywords can help make it easier to find, say, family photos among a year’s worth of professional and other kinds of photos. 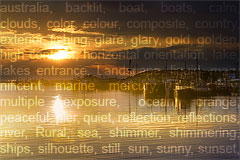 This is where the keywording task becomes daunting. Adding additional keywords to individual photos is time-consuming, tiring and not fun at all. However, the payoff can be huge. Searching for a specific image from thousands of keyworded ones is so much easier and the time spent keywording can be saved in searches many times over.

This is the biggest weak point for me in my process. I rarely spend the time keywording that I should, and as a result I have to rely on my file naming system to find photos. However, if I am ever offering photos for sale, I’ll dedicate a great deal of time and effort to keywording those photos. This helps them be found by potential customers, and adds considerable value to the image for them.

There are many tools and tutorials to assist with keywording, and I’ll refer to some of those in a later post in this series.

Next week, we'll look at the remainder of my workflow in detail. Last week we had a few good comments about how folks organize their own photo workflow. I'll be collecting and organizing the best advice for the final part of this series, so if you have some suggestions or stories of your own experience, please post them in the comments! Perhaps after reading about my workflow so far, you'll have some suggestions for improvements I could make, or maybe you can share how you've adapted some of my method into your own style. If you have any valuable resources, such as links, software or books, let us know about them! I hope to hear from you.

Look forward to next week, but don't wait till then to start organizing yourself! Remember, good organization is a way of thinking, and there's no better time to start than now.

FOLLOW THIS SERIES OF ARTICLES!
BACK — GETTING TO GRIPS WITH IMAGE MANAGEMENT
NEXT — SEEING IT THROUGH