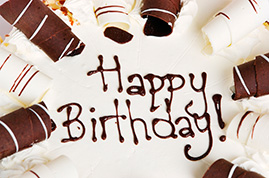 It's hard to believe, but we're ONE year old today! And what a year it's been too! So rather than rehash the site stats or most popular articles, I think we'll throw a party and hand out some gifts. Plus, you can see those stats and articles in my post titled “2007: A Great Year of Photography and Blogging.”

You guys are the best audience ever. You're actually more of a community than an audience, and I'm really blessed to be surrounded by so many great people. To show my appreciation, I'll be handing out some cool prizes to you guys.

I'll announce four different prizes over the next four days, starting tomorrow. If you want to have a chance at that gift, just drop a COMMENT ON THE SPECIFIC GIFT ANNOUNCEMENT POST and let me know you want it. Only those who enter themselves will be included in the raffle, so don't forget to leave the comment! Here are the four prizes being handed out:

So if any of these things are of interest to you, click through to the page and read the directions for the raffle entry.

Prizes will be raffled off, and each comment you leave (and those you've already left) for the entire month of January will count as one raffle ticket. This is why it's important to let me know that you want the prize given for that particular day, because then I have to keep track of your comments and mark you down for an entry into that raffle. You can enter into as many prizes as you want, but you can only win one.

Prizes will be raffled off in early February. If you win one of them, you won't be eligible for the remaining raffles. So don't enter for the prizes that you really don't want. If you don't win the first one, your entries will carry over into the next raffle.

So keep your eye on the blog and subscribe to the feed if you haven't already. The prize posts over the next four days won't be showing up on the front page, so make sure you check the recent posts in the sidebar or keep up via the feed.

If anybody else wants to contribute to the prize pool and extend the giveaway, contact me by email with your idea. It doesn't have to be anything big or expensive, and I'll post your gift on day 5, 6, 7, etc and give you full credit for contributing. It would certainly be appreciated, but it's not expected of anyone — the main idea of this birthday party is to GIVE OUT some presents!