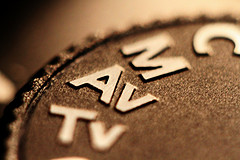 This quick little tip is aimed mostly at the dSLR users out there who are still learning the ropes. I know how easy it can be to leave the camera in an “auto mode” so you don't have to worry about all that technical crap. But the non-auto stuff really isn't that bad, and it opens up a world of possibilities for you.

So this little exercise might be somewhat disappointing on your first go, but it should get you rolling in the right direction. You can do this in a single outing or split it up over multiple days — whatever works for you. And if you don't feel enlightened after your first try, do it again. Alright, here's the technique:

Again, if you've never shot the priority modes or the manual mode before, this might be brutal on the first round. You'll mess up a bunch of shots, you'll miss shots entirely, and you'll probably be pissed off. Stick with it though!

The best way to learn the semi-manual and fully-manual controls is via practice. You can read about this stuff all day long, but that will only take you so far. So get out there and learn your camera!

Any of you experienced folks have tips for those experimenting with the mode dial? Things to watch out for? Things to try?