As I was doing some overdue DVD backups, I realized that my collection of photos has been growing at an exponential rate. Earlier backups (from 2002-2006) only required a couple of DVDs to hold all the photos. Then, each month in 2007 and 2008 has been progressively larger and larger, thus requiring more discs. So I began to take a look at the amount of data I'm producing over time. 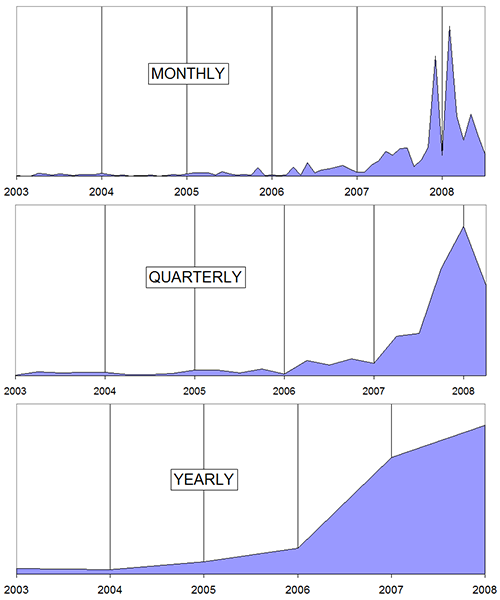 The chart below shows the cumulative disk space I'm using over time. So each new value along time is the sum of existing disk space used plus new disk space used for that time block. In other words, this is my hard drive filling up.

Scary, isn't it? I'm willing to bet that this trend is not completely uncommon among many photography enthusiasts. You start off with your little point & shoot, creating jpegs as you go. Then you get into it and you decide to upgrade your camera. Now you're shooting more because the camera has more capabilities and your skills are improving. Then you upgrade the camera again, resulting in larger and larger file sizes. Then you decide to shoot raw format, and the file size skyrockets. Throw in some monster Photoshop files, film scans, and all of the sudden you're producing many gigabytes per outing.

As far as I can tell, there are 2 reasons for exponential disk usage: improvements in technology and an increased passion for photography. Newer cameras are producing some massive files, and there's still no end in sight for the megapixel war. Not only that, but as you shoot more you learn more… and in turn you shoot more… then you learn more… etc.

So basically, what I'm saying is that if this trend hasn't happened to you yet — it will. Most photographers in their first or second year of shooting don't realize what's coming. Then all of the sudden, they're neck deep in tens (or hundreds) of thousands of photos and several hundred gigabytes of data to keep track of.

If you're really into photography and you find yourself shooting more, start planning ahead. Get yourself a good organization scheme and stick to it. And save a little money every so often to put down on some new storage space when you fill your hard drive.