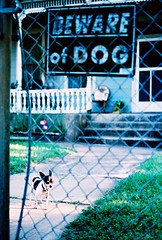 I've had a decently positive buying experience on eBay when it comes to old cameras. I've purchased six cameras and four of them arrived in great condition just as the seller stated. But I was disappointed with two of them.

In both cases, the seller stated “Camera is in good working condition.“ Now generally, if I see that I'll assume that the camera is operational in every aspect and that I won't have to pull it apart to fix it. But I guess the phrase “good working condition” is open to interpretation.

The second camera (which I just received in the mail) was in far worse shape. The latch mechanism for the film compartment door is totally beefed up. It holds the door closed as long as you don't touch the camera. And the viewfinder… well, it's more than a little foggy. Oh yeah, and the focusing ring feels like it's running on sandpaper. So I'll be pulling this one apart to see what I can do with it. But, for a $10 camera I'm not too disappointed — I just wish the seller's description was a little better.