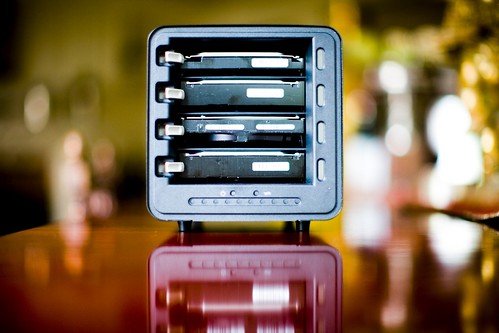 In the previous section of this “photo backup” series, we went over the external hard drive. This article deals with something that’s a bit fuzzy to define — the RAID tower. It’s similar to an external drive, but it can also be used as a working drive and/or a backup drive.

FOLLOW THIS SERIES OF ARTICLES!
TOC — PHOTO BACKUP GUIDE
BACK — HAVE YOU EVER NEEDED TO USE YOUR PHOTO BACKUP?
NEXT — DVD

So again, I’ll try to lay out the topics in a similar fashion to the previous articles. And hopefully the technology doesn’t change on us before you read this. 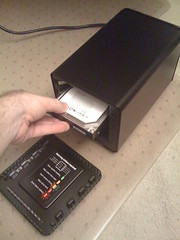 A RAID tower is a collection of two or more internal hard drives housed in a box that contains special RAID (Redundant Array of Inexpensive/Independent Disks) hardware/software, and connects to your computer as if it were a single external hard drive. These towers can be utilized as a working drive or a backup drive, depending on your needs. In either case, the tower is designed to protect your data from hard drive failures (typically one disk can fail and you’ll still be able to recover your data).

RAID towers come in various shapes and sizes, but the most common form is a cube-like enclosure that holds 4 hard drives. The towers that hold 4 drives are capable of a RAID 5 configuration. Other towers may only hold 2 drives, and these are capable of a RAID 1 configuration. In either case, your data is protected against the failure of a single drive. The difference is that RAID 5 allows you to use more of your disk space (RAID 1 is just a mirror, so one whole drive is used for backup).

RAID towers have similar data connections to external hard drives (so I won’t go over them again), but some towers will have multiple connections to boost the data transfer rates. Some will also have the ability to be networked via Ethernet. 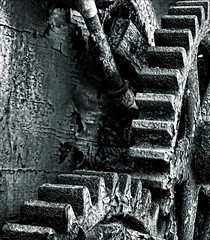 The nice thing about these towers is that they are intended to take care of the real-time backup for you. If you’re using it as a working drive, the RAID configuration will automatically backup your work as you go. If one of your hard drives in the tower decides to fail, you can simply replace the drive and the tower will rebuild your missing data.

If you decide to use the tower in a similar fashion to an external hard drive backup, you’ll still need to find some software that duplicates your work from your working drive to the backup drive. But again, if one of the drives in the tower gives up, you can replace it easily without having to re-backup your entire working drive.

In either case, the stuff contained in the box has a layer of redundancy. But it’s certainly not a solve-all solution. No single backup method can protect against every possible failure. 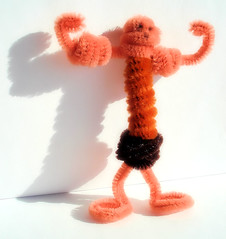 RAID towers are easy and expandable. The embedded hardware and software takes care of backing up your data, so you don’t need to be as diligent about manually backing up photos. The other main perk of these towers is that you can upgrade the storage capacity as your collection grows. Standard RAID 5 towers will require that all drives be of the same capacity, but a unit like the Drobo overcomes this limitation.

RAID towers are also somewhat portable and they can be accessible via a network. If you had to take one with you somewhere for some reason, you could do it. And hooking it up to your local network is a great way to ensure access to your photos from several computers around your home or office. 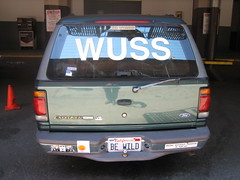 RAID towers are still basically an external drive, with a limited connection speed. Most users will never notice this limitation, but it is a limitation nonetheless. The other downside to a tower is that you’re only protecting against hard drive failures if you use it as a working drive. Fire, theft, and other major disasters can wipe out all your drives at once. And like external drives, you’ve got a box of hardware sitting on some desk or shelf just waiting to be knocked over.

If you can justify the cost of a RAID tower, they’re certainly worth it. These devices add an extra layer of protection against common failure modes. I would, however, strongly suggest that if you decide to use a tower as your main working drive, to also use a secondary method of backup. Putting all your eggs in one basket is never a good idea.

I would suggest a RAID tower for folks with a considerable sized photo collection, maybe 500GB or more. Anything less than that, and you might as well just use a single drive for working and another single drive for backup. But as your collection grows into the terabytes, you’ll need more than a single drive to work with.

Note: Feed readers will have to visit the website to view selected products.