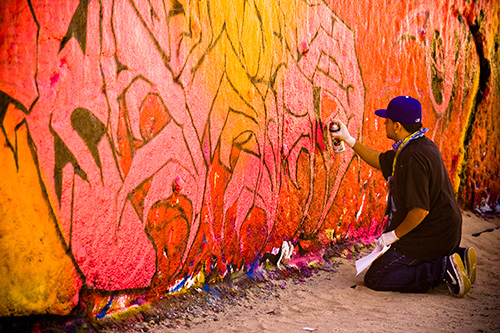 I've been so tied up with film lately, so I wanted to take a look back at a digital photo that had quite a bit of post-processing done to it. This photo was taken at the graffiti walls in Venice Beach, California. I've always been attracted to graffiti as an art form, and being able to capture one of these artists at work was a treat. This area is designated for graffiti artists, so there's no vandalism happening here.

I wanted this image to really pop with color and intensity, while having an “edgy” look to enhance the mood. The photo was shot in RAW and processed entirely through the Adobe Camera Raw software (so no Photoshop). Here's the process:

This may be a bit extreme for your tastes, but I wanted to push the photo until it was alive with color.