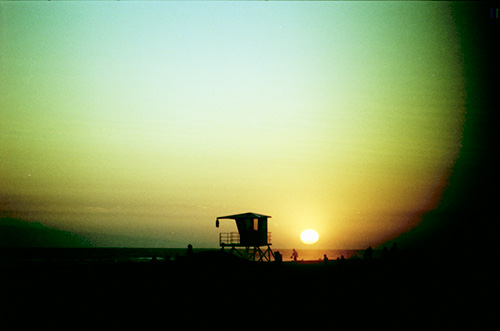 This photo was taken while I was hanging out with a few friends one afternoon at Huntington Beach. It was kind of a last minute “whatcha doin this weekend” sort of thing. Bryan Villarin (F/B/T), Arnold (F/T), Jason Stone (F/B/T), John Watson (F/B/T), my son Rex (F), and I (F/B/T) were all there to grab some shots of the beach and pier while we waited for the sunset to see if anything exciting would happen (you can see them all in this Polaroid I took). 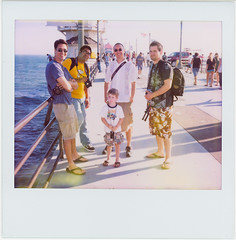 Just as we were finishing up dinner, the sunset was approaching so we zoomed back over to the beach to grab some shots. I only had film cameras with me that day (4 of them), and I had been shooting black and white with my SLR and TLR. I still had about 10 shots on the roll in the SLR, so I finished that one off and quickly loaded a roll of Velvia 50 with the intent of cross processing. I got about half way through the roll before the sun was gone. If I had decided to swap out the roll in my TLR, I probably would have missed it altogether.

I took the Velvia with me solely for the purpose of shooting the sunset and cross processing it. I assumed that the Velvia 50 would turn out the same as the Velvia 100 when cross processed, so I was expecting to get some serious red/magenta shifts on the already red/orange sunset. Instead, I got a blue/green shift similar to what I've seen with Ektachrome. I'm not at all disappointed with the results… it's just not what I had expected.

And on top of all that, I got this really neat photo that ended up with a heavy vignette/underexposure on the right side of the frame. Very cool results all around. This is one of the reasons I'm attracted to film — sometimes the results are completely unpredictable, but better than you had expected.

Yup, seriously… no digital post processing other than maybe some dust removal. Sometimes I also adjust the white balance on my cross processed stuff to remove most of the color cast, but I left this one alone.