Here's a shot from my recent trip across the country, on my move from New Jersey to California. This sunset photo was taken at the Grand Canyon in Arizona, right after the sun went down. We showed up at the Canyon just before sunset, so I only had a few minutes to get ready for the big color show. The clouds were amazing, and it was a great show. This one spot just above the sun was lit up like flames, and lucky for me I was using my super-wide, so I was able to capture the whole thing. I exposed this shot for the sky and allowed the foreground to go almost black (though there was some color information in there). I also shot at ISO100 in order to minimize any noise, which in turn caused a low shutter speed, which in turn caused me to use a large aperture. If it were any darker, I would have had to bump the ISO up a notch. 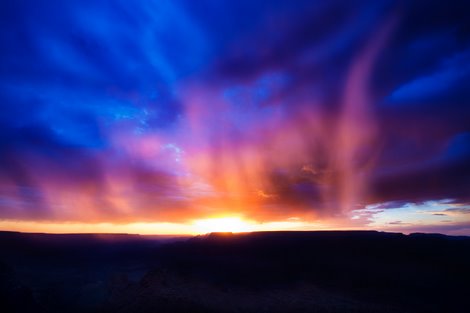