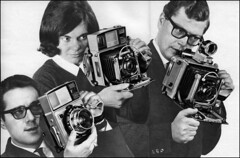 With the boom in digital cameras, used film equipment has been dropping in price and increasing in availability. Many people switch over to digital and decide to get rid of their old film stuff that they'll probably never use again. This is good news for anybody wanting to get into film — cameras and lenses are insanely cheap (though, not the ones shown in this first photo!).

The cheap old film cameras are fun to use and great to experiment with. If you currently use a digital camera with all the bells and whistles, I'd suggest looking into a fully manual film camera from the 50's, 60's, or 70's. There's a huge selection of these cameras out there, and most of them are still in great working condition.

Here are some things to think about when looking for a new used camera. And for additional reading on the topic, check out Antonio Marques' 5 Tips for Acquiring Old Cameras.

FIGURING OUT WHAT YOU WANT 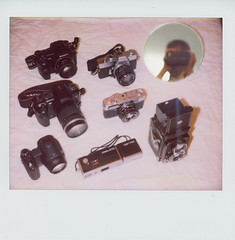 One way to start refining your selection is to choose a type of camera. Maybe you want an SLR, or a rangefinder, or a TLR, or maybe a box camera. Find something that interests you and meets your needs. Be aware of camera types that require removable lenses, and be aware of the type of film they use. Some film formats are no longer offered, extremely hard to find, or very expensive.

Another way to narrow your search is by selecting a film format. Be sure you choose a film that you can actually buy or one that can be re-spooled from a standard film. You'll have a wide selection of cameras if you stick with the 135 format, or 35mm film. But maybe you want to jump into medium format and find something that takes the common 120 format. If you want to know what's readily available, visit your local camera shop or film store and see what they have.

And yet another method of refining your selection is by brand, or camera manufacturer. If you're a brand loyalist like me (I love Minoltas), you'll limit your searches and avoid comparing across brands. But beware, there are a ton of old camera manufacturers out there, so this may not be the best method of selection unless you feel very strongly about one in particular.

Oh, and one last thing… figure out what you're willing to pay for the camera BEFORE you start looking at them. If you want to keep it under $50, keep it under $50. Going into a camera purchase without a budget is a bad idea no matter what kind of camera you're buying. 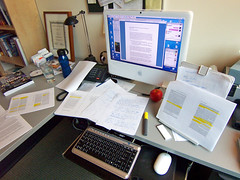 Once you've figured out your direction, start looking around the web and do some research. Wikipedia and Camerapedia are good places to do general research on cameras. Look around on the sites that sell the cameras and get a feel for the price and condition of the cameras. During this process, you may end up selecting a particular model that you're interested in, or you might even change your mind from your original intentions.

Search around for reviews, follow threads in forums, and basically dig up anything you can on your camera. The more you know about it, the better you'll be able to interact with sellers. If you go into a camera purchase not knowing the basics of how it works or the features it has, you won't know what to ask or what to look for.

THINGS TO WATCH OUT FOR

Different cameras will have different things to watch out for, but some things are similar across all cameras. I'm talking about spotting problems and avoiding bad equipment and sellers. Ultimately, what you're after is a working camera at a fair price. Here are some things to look out for while scoping your equipment. 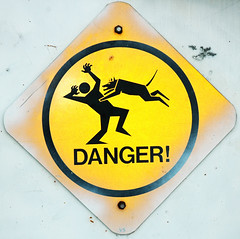 Watch out for prices out of the ordinary. You ought to have a feel for the going price on your camera — if you see one that's priced too high, you might want to keep looking. Likewise, if you see something that's listed way too low, there's a good chance that the seller isn't trustworthy or there's something wrong with the camera.

Make sure everything is in working order. Some sellers don't know the camera as well as they should — I recently bought a rangefinder “in working condition” and it showed up with a broken rangefinder mechanism! That sort of thing is kind of important. You'll also want to make sure that things like the shutter, aperture blades, and film winder are working properly. Try to get a feel for the condition of the glass, and ask about scratches, dust, and fungus. Old camera bodies are pretty tough and scratches won't do any harm, but watch out for cameras that are terribly beat up.

When was the camera last used? If it was recent and the seller is stating that it's in working condition, then it's likely that the camera will be fine. If the camera hasn't been used in decades or if the seller is selling for a friend or relative, I'd be cautious. Old cameras will keep working for quite a while as long as they're maintained and used often. If they sit in the closet for too long, things will start to rust and stick.

Cameras are sold for parts. Make sure you read the description for the camera you're buying — some cameras are sold with the statement that they do not work and they could be used for repair or replacement parts. Don't assume that all cameras for sale are in working order.

WHERE TO FIND FILM CAMERAS

There are plenty of places out there to buy used cameras. Here are a few that I've come across.

GETTING THE MOST OUT OF YOUR CAMERA 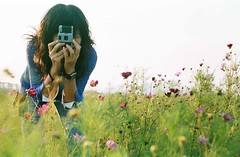 Once you get your camera and you determine that everything works properly, go have some fun! Use it, and use it often. Take it out without bringing any digital cameras along. The best way to kill your film focus is to bring a digital camera along “just in case” you need it or something. Once you learn how to use it efficiently, you might even prefer it over your shiny new digital camera.

Keep it clean and store it in a place away from moisture or extreme temperatures. Letting these old metal cameras sit for too long can cause them to freeze up. Hi-tech materials weren't as readily available in the 1950's as they are today, so your camera parts will be more prone to damage and decay… which is probably why they're built like tanks.

Experiment with different films. This is the great thing about film — you can totally change what your camera produces just by changing the film. There's more to black & white film that just black & white. You get to play with things like differences in grain, contrast, and other features of appearance. Color films are great too — they all have a different look and feel, and different cameras will produce different results on the same films. Throw in some slide film and have it cross processed — you'll get some really interesting results.

If you put the time and effort into selecting and buying your old film camera, you'll be more than pleased with your choice. You could end up with a camera that's much older than you are, and it will probably outlast your digital camera by many years.