Cameras, Cameras, everywhere. Sometimes I feel like we get so caught up in “the now” with the digital age and the boom of the dSLR, that many of us probably forget about all the other cameras out there. I’ve been doing a lot of wandering around on eBay lately (which has already caused me to buy four new cameras) and it’s quite apparent that there are a ton of cameras out there that don’t fall into the dSLR classification.

So this is just kind of a fun little post that takes a look at each of the main types of cameras still in use today. Enjoy!

The SLR camera is a fairly common sight these days, with digital versions covering every price range from affordable to outrageous. These cameras derive their name from how they’re made and how they work. Single Lens indicates that the camera uses one lens for viewing and recording photos. A series of mirrors and/or prisms direct the light from the camera lens to the viewfinder. The first mirror in the set is called the Reflex mirror, which sits in front of the recording media (film or sensor) and flips up when the shutter is released. Single Lens Reflex cameras typically have removable lenses and offer an array of features and controls — But this doesn’t always have to be the case. SLRs can be found in digital and analog (film) versions. 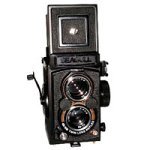 TLR cameras are mainly a thing of the past, especially with the introduction of the SLR. These cameras have a distinct look due to their Twin Lens system. One lens is used for viewing while the other is used for recording the image to the media. The image from the upper lens is reflected onto a viewing/focusing screen with the Reflex mirror. Twin Lens Reflex Cameras (despite their clunky and old fashioned appearance) actually hold several advantages over the SLR. Simpler construction, fewer moving parts, more responsive shutter mechanisms, and sturdy build are just a few things these cameras are known for. Of course, bulkiness, sometimes awkward operation, and the tendency to have fixed lenses are a few things that the standard SLR took care of. Oh yeah, and they’re film cameras (and usually medium format)… at least, I’ve never seen a true digital TLR.

The Point & Shoot, or compact camera, is another type of camera that has flourished in the digital age. These little packages are easy to carry around and equally easy to operate. Though the features and controls are limited on many models, the intended use for this camera is not professional work. Most P&S cameras are autofocus and auto meter, allowing the user to focus on the subject. Point & Shoot cameras can be found in both film and digital versions. Most of the old film versions are of the viewfinder type, while many digital compact cameras don’t even have a viewfinder (instead they rely on their LCD screen). 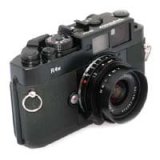 While the rangefinder camera has similar characteristics to both SLR cameras and compact cameras, it’s a different beast altogether. These cameras derive their name from the mechanism found in the viewfinder: the rangefinder. A rangefinder is a tool that allows you to judge distance and focus without actually looking through the lens. The major benefit of these cameras lies in their simplicity. They’re small, lightweight, and they contain fewer moving parts than the SLR. UPDATE: As Janne pointed out in the comments, this isn’t entirely true. The actual rangefinder mechanism is much more complex than an SLR camera. Thanks Janne! Rangefinders are famous for street photography, and you’ll find that many famous street photographers use (or did use) rangefinders. These cameras can be found in both film and digital versions, but watch out for those price tags! Some of these cameras (even the film cameras) cost more than professional level digital SLRs — but there are plenty of cheaper options out there… Just don’t start daydreaming about a Leica. 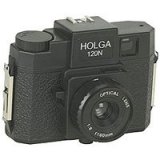 Viewfinder cameras are very similar to rangefinder cameras, but they’re missing one important element: the actual rangefinder mechanism. The viewfinder on these cameras only presents the photographer with a view of the approximate framing in order to allow for composition. Focusing is either something you guess at, or something that doesn’t happen (fixed focus). Light metering is typically non existent also, but I have seen some cameras with meters external to the viewfinder, and others with a meter that attaches to the camera. These cameras are incredibly simple, and one of the most well known viewfinders is the Holga, but there are plenty of other cameras out there that are made of metal. Viewfinders can be found in both film and digital versions, but film is more common than digital. The reason being, is that any viewfinder with an autofocus mechanism is actually considered to be a point & shoot. 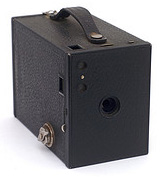 Box cameras are old, and you see even fewer of them than TLRs. The camera gets its name from the fact that it’s actually a box with a lens. The lens is typically a miniscus lens with just a single element. They’re usually fixed focus, fixed lens, non-metered, fixed aperture, fixed shutter speed, fixed everything. Like I said, it’s a simple camera — it’s basically a souped up pinhole camera. These old film cameras could be fun to toy around with, but don’t expect to shoot a professional gig with one. The most famous of these cameras is the Kodak Brownie.

Another blast from the past is the folding camera. These cameras look like something of a cross between the view camera and a rangefinder. The camera actually folds up since it uses a bellows to extend the lens, and everything folds into a nice rugged little case. A majority of these cameras use medium format film, but there are a few 35mm versions out there. These cameras were popular during the early 1900’s, and were probably phased out due to the introduction of high quality viewfinders and rangefinders.

Subminiature cameras are somewhat of a gray area, but basically anything that creates images smaller than the standard 135 format (24mm x 36mm) could be considered subminiature. These cameras take film formats such as Minox, 16mm, Super 16, 110 format, and a few others. While the cameras are still floating around out there, the films are getting harder to find (as I just found out since I bought a 110 format camera). 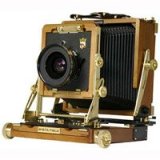 The granddaddy of all cameras… the view camera. While not the oldest type of camera, it is one of the oldest types that’s still used today. A bellows separates the lens and the film plane, and the distance and angles between the two can be adjusted. Large format cameras use the view camera setup, and many modern versions are still used today for professional needs. If you think digital photography is an expensive hobby, just do some research on these puppies and the film that goes inside them.

OK, so this really is the simplest of all cameras. The pinhole camera can be nothing more than a bunch of folded up cardboard and a piece of film. No lens, no shutter, no aperture, no need to focus, no nothing. This is something I’d like to try out eventually, but I get the impression that it’s a hobby for the patient soul (ie, don’t expect to go shoot some action photography with one of these). Although native to film, pinholes have made their way into the digital realm with things such as pinhole lens caps. And if you insist that your images must be tack sharp, don’t even think about trying pinhole.

I’m sure there are lots of odd little cameras out there from past and present — we’ve really just covered the basic cameras still in use today. I’d encourage you all to try out different types of cameras if given the chance. Heck, maybe even buy some of your own. But no matter what kind of camera you’re using, just remember that you’re still a photographer and you’re still creating a photo — the camera is just a tool.