I kind of gave away a sneak peak at my own final results from the photo used in the “Edit My Photo” project in yesterday's article on Using Photoshop to Add Vignette. So I figured I might as well post the real deal.

This photo was taken on the beach while I was at Trevor Carpenter's photowalk in Santa Monica. It was approaching evening and we all headed down to the beach for some more photo-ops. I kind of wandered off down the beach on my own with my macro lens attached. I took a few shots of some birds on the beach, but I wasn't too impressed with what I was getting at the time. I was a little disappointed that the yellow buoys were sticking out in the background, but I took the shots anyway. When I got back and saw this photo, it sparked my interest. I then realized that the buoys could easily be taken care of, and I was glad I took the shot. Lesson of the day: don't let little imperfections in the scene prevent you from getting the shot.

The JPEG (1) looks pretty dull, and gives the impression of slight underexposure (but it's actually exposed fine). I adjusted the RAW (2) file to brighten it up a little bit, add some contrast, and increase the color saturation. I also used the straighten tool to level the horizon and crop. The first thing I did inside Photoshop was some Touch-Up Work (3) to clone out the buoys and some dust spots. Then I duplicated the resulting image into a new layer and applied a Hard Mix Layer Blend (4) at 30% opacity and 30% fill to help out with the color and contrast. I still wasn't impressed with the contrast, so I applied a Levels Adjustment Layer (5) with a black point of 49 and a white point of 245. Taking the contrast to another stage, I used a Curves Adjustment Layer (6) to bring the lower mid-tones darker while keeping the upper mid-tones near their original value. For the levels and curves adjustment layers, I applied a mask over the bird to keep the small amount of detail to be found in the feathers — without the mask, the bird becomes a silhouette. Liking the contrast at this point, I looked toward the color saturation as a possible improvement. I didn't want it terribly saturated, but I wanted the colors to look a little cleaner. I increased the saturation using a Hue/Saturation Layer Adjustment (7) with +12 on the saturation — not a huge difference, but noticeable at larger scales. Then I made a copy layer of the resulting image and sharpened using the Unsharp Mask (8) at 120%, 5.4 pixels, and a threshold of 2. I didn't like how it made the entire image look, so I masked out the water and sky, leaving the beach. I also lightly masked the edges of the bird because the sharpening gave it a halo. The last thing I did to this image was the addition of Vignette (9) using the method outlined in yesterday's article with an amount of -55 and a midpoint of 20.

All of this took maybe 1.5 hours to complete (which includes going back and re-adjusting previous layers), but what I didn't tell you about was the other 2 or 3 hours of messing with it and trying things out over the course of two weeks. So I'd consider this a 4 hour photo. 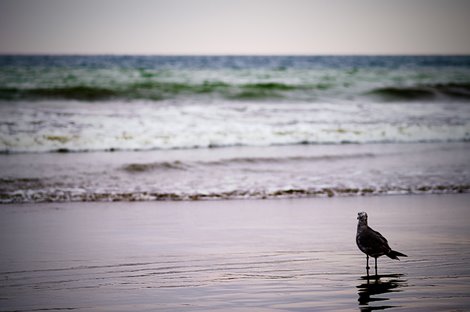 ** You can also see this photo at Zooomr and Flickr **