This photo was taken on the quaint little streets of Neuchatel, Switzerland. I went out for a little evening photo-stroll after work during a business trip. This scooter caught my eye because it was so nicely framed against a garage door with brick walls. The fact that there was a little graffiti on the door was just icing on the cake. It was getting dark out, so I had to shoot this one at ISO400 and a wide open aperture. Overall I'm pretty happy with the composition and lighting, but I'm now considering whether I should darken the left brick wall to match a little better with the right wall.

I didn't do a ton of post processing, but the change from start to finish was pretty drastic. The JPEG image out of the camera (not shown) turned out decent, but I knew I'd want to really punch it up in color and contrast. When I did the RAW conversion (1), I actually toned down the color and contrast to make it a bit more drab than it really was — I did this because I knew I'd be doing the next step in my process. I used a hard mix layer blend (2) at 51% opacity and 47% fill to really bring out the colors and contrast. I started with a dull photo because this layer blend can be very harsh when used with a contrasty photo, and I find that it gives an interesting look when done in the fashion I've used here. I then proceeded to apply a levels adjustment layer (3) by bringing the white point down to 224, which brought up the overall brightness and contrast of the photo. Then on to a curves adjustment layer (4) to bring up the highlights and midtones a little more. I wanted more darkness in the shadows, so I applied another curves adjustment layer (5) to bring the shadows and midtones down a bit. The last step was a bit of sharpening (6) with the unsharp mask. 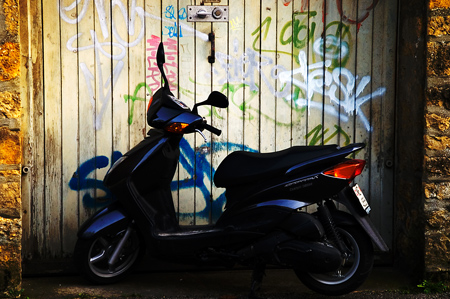