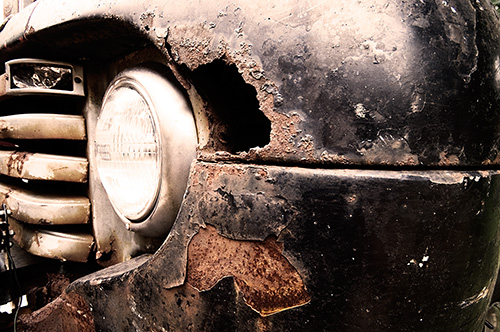 This photo was taken at my Grandfather‘s house in Missouri while my wife and I were on our move from New Jersey to California. His brother stopped by to visit, and he happened to be driving this big ugly rusted-out beast of a truck. He's kind of a character, so something like this wasn't totally unexpected. He's actually very good at restorations and building custom vehicles — he just happened to be on a “rust rod” streak at the time (I think that's what he termed it anyways). Here are some photos of the entire thing — no joke, this is what he used as his daily-driver… though I'm not sure if he's still using it or if he's moved on to another project.

The photo I shot for artistic purposes was the front driver's side corner of the vehicle. I got in there real close with my 10mm lens and got some of that neat rust and paint texture. I processed the photo to focus on some of the colors and tones while making those textures and contrasty areas stick out. All in all I'm pretty happy with this one.

I actually took most of the processing steps from Jake Garn's Tutorial Video: Everything Old is New Again — and I tweaked it a bit for this image.