Yet another shot of mine from the deck of a moving boat. I really am terrible. It's hard not to when you're in the New York waterways. This one presented itself to me as kind of a nice little capture of the Statue of Liberty with Manhattan in the frame. Since the boat was moving, I didn't have much time to frame it up and try different things. For this one, I pretty much centered the statue vertically (which incidentally positioned the city-line at about the 1/3 mark) and zoomed to include the statue and all of Manhattan. The sun was setting, so there wasn't a lot of light, and it also caused the haze to look abnormally dirty. The only saving grace for this photo was turning it black & white.

As you can see, the original image (1) was a bit dull and washed out. The layer of brown haze hovering over the city didn't make it any more exciting either. Before I did anything, I cloned out the buoy in the foreground water (2). Then I toyed around with the Adobe Photoshop CS3 black and white adjustment layer (3). I settled on 120% red, 120% yellow, -10% green, -50% cyan, -115% blue, and 120% magenta. This turned the water and upper sky dark while brightening the brownish color of the city and the haze. For me, it created a nice 3 band separation from dark to light to dark again. For the finishing touches I applied a levels adjustment layer (4) with the shadow input at 11, the highlight input at 227, and the midtone at 1.00. A curves adjustment layer (5) was used to brighten the highlights/midtones just slightly, while maintaining the shadows. Last step was sharpening (6) with the unsharp mask. 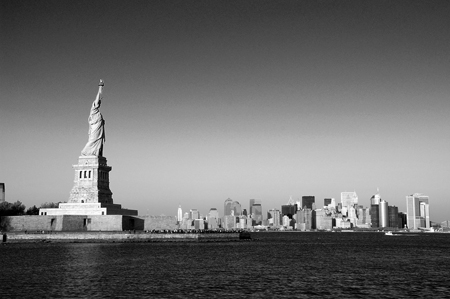