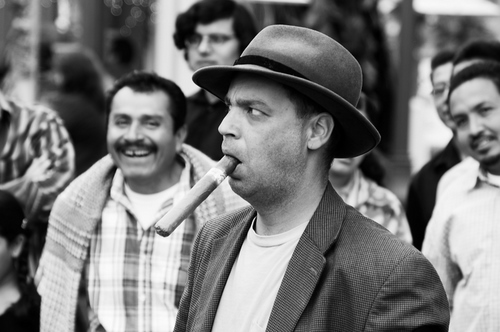 This is one of my favorite photos from the recent Olvera Street Photowalk in Los Angeles. Soon after the group met up we dispersed to explore the area, and a few of us happened upon this guy doing a little magic/comedy show. The guy was pretty funny — the magic wasn't half bad, but his antics were the best part of the show. I took 34 photos of him during the show, and this was one of the 3 that turned out pretty good. In the other two photos (1 & 2), he's actually shooting me a look — he saw me up front taking photos of him.

I feel like this particular photo has a lot going on inside the frame, but it all adds to the composition in a positive manner. The face, the cigar, the hat, the coat, the people in the background — everything seems to work together. Maybe it's just because I was there… what do you think about it?