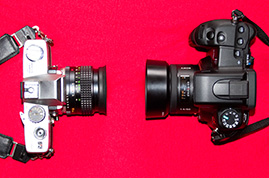 I’m constantly amazed by the things we create. Advances in technology continue to accelerate at an astonishing rate — digital cameras are no exception. Digital photography has taken off in recent years, nearly wiping out the existence of film cameras. Although there are new film cameras being introduced to the market, most of what remains in the hands of photographers are remnants from the past.

Most film photographers I’ve encountered prefer to use outdated equipment; analog cameras from decades past. Why is this? And is the equipment really outdated? Do these cameras have any substantial benefits over the latest pieces of technology? Let’s find out.

As a comparison between old and new, we’ll be looking at the following pieces of photography equipment.

The camera on the left is a 1973-ish Minolta SR-T Super 35mm film SLR. It’s fully manual in every aspect — which means focus, shutter speed, and f-number must be set by hand. The camera can operate without any batteries, but it does have a very small (and extremely long-lasting) one to run the light meter (I’d consider that a luxury item on this camera). And after 35 years, it still works just fine. This camera was given to me by my Father (… or maybe he’s just lending it to me) several weeks ago. He also had a few lenses for it: 50mm f/1.4, 135mm f/2.8, 80-200mm f/3.9, and a 2x doubler.

The camera on the right is a 2008 Sony Alpha a700 APS-C format dSLR with 12 megapixels. It’s fully automatic in every aspect — which means focus, shutter speed, f-number, ISO, etc can be determined by the camera or by the photographer. The camera is useless without a battery, and the battery might only last a few days. I purchased this camera just a few months ago. I also have a small collection of lenses for this camera (most of which were acquired while I was using my Minolta Maxxum 7D): 50mm f/1.4, 100mm f/2.8, 10-20mm f/4-5.6, and 18-200mm f/3.5-6.3.

Both cameras operate in the same basic fashion (since they’re both SLRs), but they are also completely different on many levels. And in several areas, I’m finding the old film camera to be superior. Of course there are many more things that the dSLR does better than the film SLR I’ve shown here, but that’s not the point of this article.

So let’s explore the reasons I’m falling in love with this old film camera.

NOT A SLAVE TO ELECTRICITY

How amazing is the fact that this old camera can take photos with no assistance from a battery? Every motion it goes through while capturing that image is driven by the potential energy stored when you wind the roll to the next position. Not only that, but the timing for the shutter, mirror flip, and stopping down of the aperture all work in-sync to allow a controlled slice of light to land on the film. It really is amazing.

I did mention this camera has a battery… but I also said it was a luxury item. It runs the light meter (which we’ll talk about in a moment), but it isn’t critical to the operation of the camera. An external light meter or educated estimate could also suffice.

SLOWING DOWN AND USING YOUR HEAD 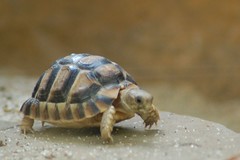 I suppose one of the biggest differences between the two cameras is the amount of time they take to use. The dSLR is quick — point, focus, shoot. No messing with manual controls if you don’t want to. The film SLR, on the other hand, is painfully slow to frame up a photo. Manual exposure isn’t so bad, but the manual focus aspect takes more time and effort for somebody who isn’t used to it (like myself).

Not only are the controls slower, but the size of the media is smaller too. 36 shots to a roll rather than several hundred. Granted, you can put more film in the camera, but that costs money. These limits really force you to slow down and pay attention to what you’re doing, and that’s a good thing.

Having never used a full frame camera before, I hadn’t realized how drastically different the viewfinders are. After using the film camera for a short period, looking back through the viewfinder of the dSLR is a bit disappointing. 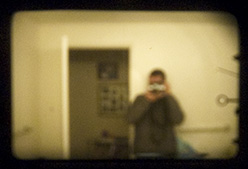 If you’ve ever had a hard time understanding the “crop factor” on your dSLR, try this little experiment. Get a 35mm camera and a dSLR outfitted with lenses of the same focal length (I have a 50mm for each). Then look at some object through both viewfinders. Guess what? The object is the same size. Your digital camera doesn’t magnify things, it just cuts out a bunch of the scene around the edges. Hence the term “crop factor“.

The above images were taken through the viewfinder of my film SLR (left) and my dSLR (right). You can see that the subjects are the same size, but the dSLR shows much less of the scene due to the 1.5x crop factor. The images were not scaled separately, only aligned and cropped simultaneously to produce images fit for the web. 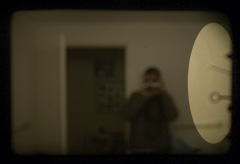 Like I mentioned above, the only reason my film SLR has a battery is to run a light meter. The neat thing about this light meter is that it’s analog, meaning it does its job constantly. It’s an elegant design — simple, intuitive, and it has such a low power consumption that the battery will last for years.

Digital cameras, on the other hand, only meter the light when you depress the shutter release half-way (unless there are models out there that also provide constant metering). So even if you’re using manual mode, you still have to meter the scene with the press of a button. Maybe it’s not a big deal for most photographers, but you’d think the camera would at least offer the option for continuous metering.

As shown in this photo, the light meter is the needle and the exposure setting is the ring. As more light enters the lens, the needle moves down. With less light, it moves up. The ring is moved by adjusting your film speed, f-number, and shutter speed. To set the exposure correctly, just make the needle go through the ring.

Well… sort of. Focusing a lens manually is still a difficult skill to acquire, no matter how many visual aids you have. See, digital cameras are very much intended to be auto-focused. The focusing rings don’t have the latitude you need to fine tune your setting, plus there’s no rangefinder to tell you that you’re focused properly.

In my film SLR (which has no auto-focus capability), there is a focusing aid built into the camera called a “rangefinder”. The area at the center of the viewfinder gives an indication that the scene is either out of focus or in focus. This particular rangefinder is a “split image rangefinder with a microprism collar and matte ground glass with Fresnel” (seriously…), and it works as shown in the images above. The image to the left is focused too shallow, the center image is focused, and the image on the right is focused too deep. So when your split image goes away, you’re in focus. Awfully handy, but it still takes time and effort to achieve sharp focus — especially when using lenses like the 50mm f/1.4!

In these images you can see the actual size of the rangefinder in comparison to the entire frame. The previous images appeared to make the rangefinder quite large, but that’s only because of the lens I used to take the photos (105mm macro). So it’s basically a chunk of glass that sits directly above the mirror. Again… elegant and simple.

DOES ANY OF THIS STUFF MATTER?

Sure it does! It’s interesting to see how things have progressed over the years, and how technology has effected photography. The era of film cameras was a very important one, and it would be wise not to forget where our roots lie.

Also, it would be wise for camera manufacturers to look back at these old cameras every once in a while and take some notes. The people who designed them did a lot of things right, and it appears as though the digital wave has wiped out many of those things.

At the top of the article I pondered why many film photographers prefer to use older equipment. I suppose the answer will be different for everybody, but for me it has something to do with the fact that I’m using a camera that’s older than I am and it’s the same camera that has taken so many photos of me as a child (plus all the reasons I’ve listed throughout the article).

Tell me… will your digital camera still be working in 35 years? How about 5 for that matter?