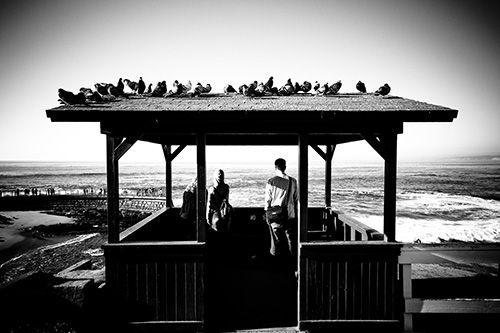 This shot was taken during the La Jolla photowalk in early February. At the time, I found the scene to be very interesting — the hut, the birds, the people, and the ocean in the background really seemed to work together in this candid shot. I kept things fairly well centered because of the strong symmetry already present in the hut. The Birds and the people served to break up that symmetry in isolated areas, so I didn't feel I needed to break it up even more. Lucky for me, I also left some extra room at the top of the frame, which served as a nice backdrop for some heavy vignette.

All of the following post-processing steps were done with Adobe Camera Raw — no Photoshop was used on this photo.