This is one of my more interesting black & white photos. I took this while visiting the Princeton Campus, which I live about 15 miles from. My parents were visiting from back home in Idaho, so my Dad and I went out to scope the campus and take some photos. It was actually a pretty nice day with just a little bit of an overcast in the sky. This is one of the buildings on campus, but I couldn't tell you which one. I shot this handheld, but at 1/750 seconds. Plenty fast for the focal length I was using.

I had actually ignored this photo for several months because the original just didn't look usable (as you can see). But then I got on one of my black & white trips and I started playing around with this one. The first thing I did was crop it square. It was shot landscape, but there was just extra nothing on either side of the building, so I cut it out to frame the building a little better. After that, I converted to black & white using the Photoshop CS2 Channel Mixer (didn't have CS3 at the time) with 25% green and 75% blue. Then I did a levels adjustment by bringing the white point down to about 168 in order to brighten the building up a bit. I also created a layer mask at this point that separated the sky from the rest of the image so I could work on each one separately. So the first levels adjustment was just applied to the building. Then I used the same layer mask to apply a curves adjustment to the building. I adjusted the curve to a very harsh “S” curve to really bring out the contrast in the brickwork. Then I inverted the layer mask and applied it to a levels adjustment for the sky. Since there wasn't much contrast in the sky to begin with, I had to bring the black point up to 170 and the white point down to 222. Then I applied a curves adjustment to the sky with another strong “S” curve to boost the contrast. Since the sky didn't have a lot of contrast to begin with, my adjustments forced a lot of noise to become apparent in the sky. I considered trying to fix it, but I think it adds to the mood so I left it alone. The last thing I did was add vignette to the photo to darken the corners and boost the mood. And of course, a bit of sharpening at the end — though this photo didn't need much because of the already high contrast. 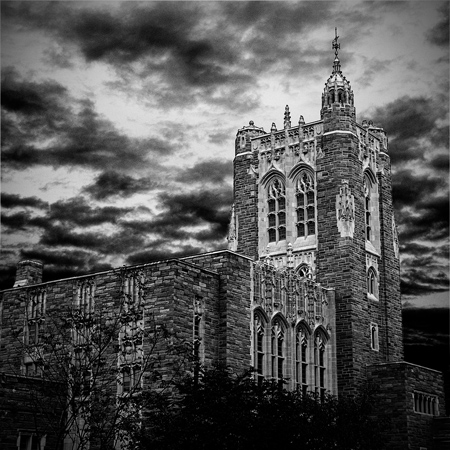