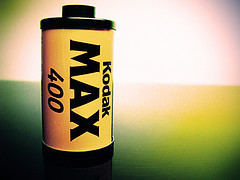 Digital cameras are great: you can take a bunch of shots, view them as you go, and even delete the bad ones (though it’s not advised). But does this make us less attentive to what we’re really doing? With film, you have a set number of exposures you can take — no previews, no do-overs. Obviously, you can carry more than one roll of film, but then it becomes a matter of expense and your ability to carry the film with you.

Yesterday, I had the opportunity to shoot film for my first time. We had a little family get-together and my cousin brought her film camera so I could try it out. The camera itself wasn’t much different from a typical dSLR, it’s just missing the big LCD on the back. It was actually a Minolta Maxxum SLR, so the camera was very comfortable to me. I had a good time shooting with it, but I have no idea how I did until we get the film processed.

From the moment I had the camera in my hand, my mindset was completely different than usual. All of the sudden I was limited on my shots and I really began to evaluate what I was doing with the camera. I took extra time to find the right composition, and from the right angle. I gave special attention to making sure the camera settings were just right to give the correct exposure and DOF. I also wasn’t taking multiple shots of the same thing with slightly different settings — no room on the film to do that.

So here’s my suggestion: whether you’ve shot film before or not, set some time aside to “pretend” you’re shooting with film (not all the time, just as an exercise). Limit your number of shots to 36, no previews, no erasing images. Go out somewhere with your digital camera and take your 36 shots before heading back to see what you get. You might just be amazed at what you can teach yourself while you’re out shooting — plus you’ll probably be very pleased with how many good shots you can get when you force that limitation.