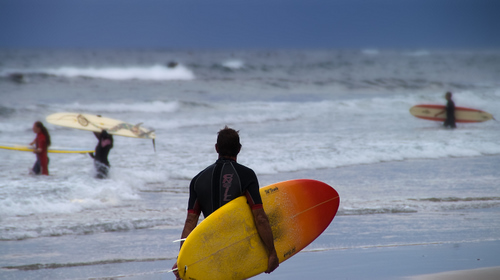 I showed this one last week as part of a project entry, but I didn't go into any detail on how it was created. I took this photo on the beach at Encinitas, which is just north of where I live by a few miles. I was with my Dad (who was visiting for the weekend) and while he was testing out his new 2X teleconverter with his 300mm lens, I was forced to focus on subjects a little closer to dry land. It was really overcast and a little chilly, but that didn't stop many surfers from getting out in the water. As this guy walked toward the water, his surfboard really caught my eye so I took a few shots. I'm fairly pleased with the outcome of this image, but my vertical composition was ever so slightly off — I would have like to gotten the bottom edge of the surfboard in the frame.