This photo was taken in my last weeks as a New Jersey resident. My wife and I went out to the Seaside Heights boardwalk with some friends from work, and I decided to take the camera along as a last ditch effort to capture some of the culture out there. I took this shot with the notion of capturing the colorfully hectic nature of the boardwalk ride section. I used the painting of the woman to anchor the photo as a static piece in contrast to the moving ride. It's a busy photo, but it's kind of fun to look through.

The JPEG (1) on this one was pretty washed out in color (as usual), but the processed RAW (2) made for a decent starting point. I wanted strong colors in the end result, so I used ACR to bump up the vibrance and saturation. Then I applied a curves adjustment layer (3) to brighten the highlights while maintaining the shadows. The next step was something I typically do with graffiti photos. I copied the image using a Stamp Visible command (Ctrl+Alt+Shift+E) and I applied it as a Hard Mix layer blend (4) at 30% opacity and 25% fill. This helped to add more contrast and saturation to the photo. The last step was sharpening (5) using the Unsharp Mask at 150%, 3.3 pixels, and a threshold of 1. 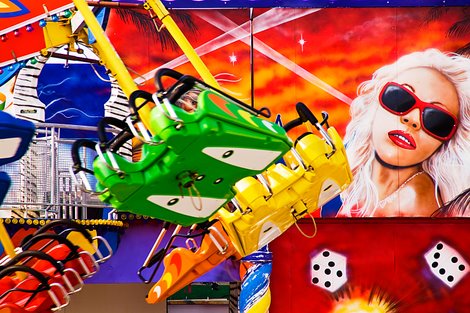