In the “PhotoBlog” section, I usually post an article about how I created a particular photo. But this time, I'd like to see how you might approach a particular scene. I want you to step into my shoes at the moment I shot the photo shown below, and tell me how you might have done things differently (or the same). 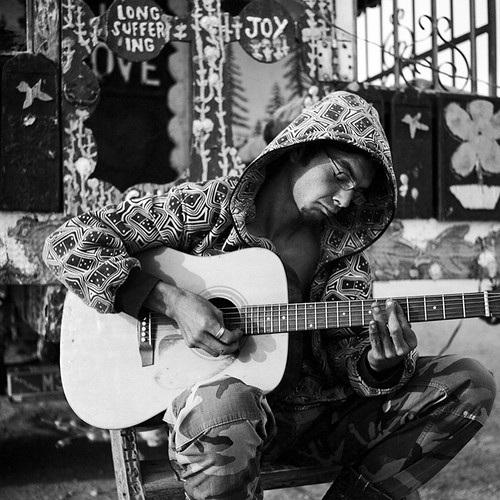 For this post, read through the stuff below and tell me how you might have taken the shot.

Let's start with the location… Salton Sea, California. This is a strange place to new visitors, filled with an interesting mix of beauty and decay. I was at a location known as “Salvation Mountain” on the east side of the lake, a small distance from the water. It's sort-of a “holy” destination, created by a few (mainly one) religious enthusiasts. I don't know how I can explain any better than to point you to my set of Salvation Mountain photos.

For this particular scene and subject… random guy, playing the guitar, on the back of a broken-down and over-decorated truck. He was sort of on the sidelines of the main attractions at Salvation Mountain, not really trying to draw attention to himself — just keeping to his own business. But he, and his surroundings, interested me so I asked him for a portrait. He agreed and asked what he should do. I said “just keep doing what you're doing and I'll get the shot”. So there you go — you've got a willing participant posing for a portrait in an informal state. 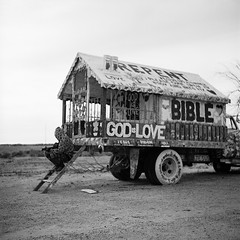 And the technical stuff… like equipment, lighting, etc. I was using a 1956 Minolta Autocord MXS — this is a fully manual TLR (square format Twin Lens Reflex) with no light meter, loaded with Ilford PanF+ film (ASA50). The fixed focal length is 75mm (but remember, this is medium format film), a maximum shutter speed of 1/400 seconds, and a maximum f-number of f/3.5. Oh, and the ambient light was mostly sunny, fading into somewhat overcast, but hard shadows existed. The sun was to the left of you (as you faced the subject) and it wasn't too high in the sky (approaching sunset by about an hour or two).

Oh, and one last thing… you're on shot 12 for this roll (the last shot), and the rest of your film is out of reach. You get one chance to make this work and you want to get a good portrait of this fella playing the guitar as he sits on the back of an old truck. Also envision yourself wanting to get the shot off quickly so you don't lose the opportunity or frustrate the subject. The smaller photo shown here is a different perspective of the scene and subject.

SO WHAT WOULD YOU DO?

… right down to the technical details of the camera settings, the crop, the perspective, and the timing. In particular, would you frame it the same way I did? I ask this because I know I committed a “guitarist portrait sin” by cutting off the head of the guitar. My friend Tasha brought this point up because she's a very talented concert and musician photographer — and I'm glad she did, because I was waiting for somebody to call me out on it. But given the circumstances, I'm curious how others may have done it differently under the same conditions.

AND HERE'S WHAT I DID…

The technical stuff first — I shot the photo at 1/400 seconds and f/4 because it was slightly less than full sunshine. I wanted a shallow depth of field because he was sitting so close to the busy designs of the truck right behind him, so a the fastest shutter speed was a requirement in my mind. I also wanted to get as close to him as possible so that I could utilize that depth of field and blur the background a bit. This is where my dilemma began — get close to achieve the desired dof and background blur, or step back and get the desired framing. I knew that I couldn't get both effectively. I did frame-up the shot to include the whole guitar, but I was far enough back that there would be no real separation between him and the background. I decided against this choice. Any closer and I'd cut out the guitar entirely — not really what I wanted either. What to do? I chose a middle ground and I cut off the head of the guitar. I was probably standing 6 or 8 feet from him when I took the shot. Maybe it wasn't the best choice, but it was most reasonable decision I could make in a 10 second window.

So again, what would you do given the situation I outlined above? Would you take the same shot? Would you step back and include the whole guitar at the cost of blending the busy background with the main subject? Or would you step closer and throw the guitar out of the frame entirely while maximizing the background blur? And remember — you only have one shot with no crutches!