Jim Goldstein at JMG-Galleries is running a photography blog project with the topic being your Favorite Photo and Background Story. The deadline is May 18th, so there's still plenty of time for you get over there and check out the rules — all you need is a blog, a favorite photo, and a story that goes with it. 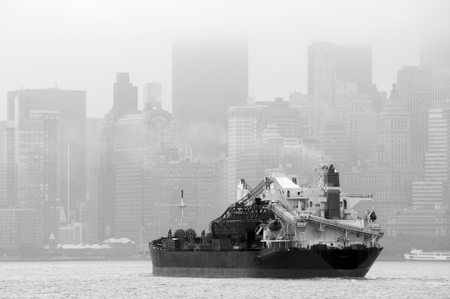 I've posted this one before (about 1 month ago), but I'll add a bit to what was in the previous post. Also, you can see how I did the editing in that previous post.

This photo is one of my New York photos that turned out pretty good, and I wasn't really expecting it to. I took this shot while standing on the Staten Island Ferry as I was returning to Manhattan. My brother was out visiting from Idaho, and I was showing him around the city. I was a little upset because of the weather, but now I'm actually glad it wasn't sunny and dry — otherwise this shot wouldn't have happened. It was kind of a cold drizzly day with low cloud cover and a bit of fog and light rain. Luckily it wasn't too dark out because I was shooting handheld on a moving boat zoomed in at 200mm (that's like a triple offense or something), but I managed to squeak out a shutter speed of 1/200 seconds with a decent aperture. I was also standing on the front of the boat, kind of tucked back into the overhang to avoid the rain drops trying to get at my lens. I managed to get a few shots off before a gust of wind blew water all over the front of the camera.

I composed the shot in the vertical direction so that the low clouds and the water would occupy about the same amount of space within the frame. This would effectively center the background of hazed out buildings. I did my horizontal composition to offset the boat just slightly from the center, giving it extra room in the direction is was heading. This all took several tries since I was wobbling around on a boat, but I finally got one that turned out just right. This shot wasn't rotated or cropped in the post-processing — just a black & white conversion.

There are several elements of this photo that make it my favorite. The fog and low cloud cover was just thick enough to fade out the buildings and bring focus to the boat. The long focal length compresses the perceived distance between the boat and the buildings, making the boat appear larger and closer to the shore than it really was. I like the dark tones and amount of contrast in the boat as compared to the washed out background. And I like the small amount of exhaust smoke rising from the top of the boat, just barely visible. Aside from those things, I suppose the main reason it's my favorite is because I never imagined that it would turn out well because of the conditions — I actually didn't touch it in Photoshop for the longest time because it just didn't do anything for me. I gave it a chance in black & white, and I was hooked from that moment forward.