It's funny how many times you take a photo with all expectations of creating a masterpiece… only to find out that it's not at all usable or to your liking. For some reason it looked better through the viewfinder than it did on your computer screen. Then there are the times that you take a photo with no high hopes of creating that gallery worthy photo, but it turns out pretty darn good. This one is more the latter than the former. It's not my best, but it turned out a lot better than I thought it would. A first glance at the original, and I was ready to forget about it.

I took this photo while I was exploring parts of the Delaware Water Gap on the New Jersey side. There are several trails follow various creeks and rivers feeding into the Delaware. I was hiking up one such trail, mostly taking photos of the small waterfalls, when I noticed a fallen tree with some orange fungus growing on it. I noticed it because I was using it as a base for my mini tripod while shooting a nearby waterfall. So I stepped back and took a few shots of the tree and it's fungus, varying my angles and compositions. The photo shown here probably turned out the best because of the strong diagonal impression from the tree trunk.

If I could go back and do it again, I would have done one of two things: used a smaller aperture to get a better DOF and/or focused closer to the foreground to bring the front of the picture into focus and let the background fade off into a blur. You can see here that the foreground and background are both out of focus, but this is a difficult type of shot to deal with DOF in because I was so close to the tree in the foreground — I might have even had my shoulder against it as I laid on the ground to get the shot. Next time I get the chance for a shot like this, I'll be sure to experiment with the DOF a little more.

The original JPEG (1) on this photo was a bit blown out in the highlights while being clipped in the shadows at the same time. The shadows didn't bother me so much, but the highlights looked pretty bad — plus the white balance was a bit warm. The RAW file had better dynamic range, so the highlights were preserved much better. After editing the RAW with ACR (2), the exposure and white balance looked a lot better. I fiddled around with this one for a while, and I eventually settled on going black & white (3) using the channel mixer in Adobe Photoshop. This looked… okay… but it wasn't getting me excited. So I punched some holes in the black & white conversion with a layer mask and let the trail of little orange fungi shine through (4). Now we're talking! The final steps (5) included a color burn and color dodge layer blend at low opacity to boost the contrast and add depth to the texture of the tree, followed by a bit of sharpening.

The real key to this photo was the selective coloring step using the layer mask. By selecting only the orange items to be shown in color, I've added a little something extra to the black & white photo. It works in this photo because the orange isn't terribly overpowering in comparison to the rest of the image. 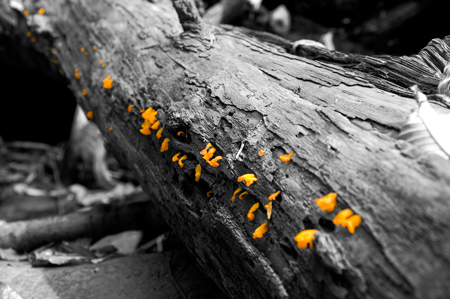