This guest post was written by Jason Acar. Jason is currently a content writer for MyCamera.co.za. He has extensive journalism experience and a keen interest in photography.

Many budding photographers still debate whether to buy digital cameras, or opt for older analogue film models. The truth is, technology has advanced so much that digital cameras can achieve just about anything you want when it comes to photography.

To easily display the rise and fall of both digital and film eras, we have compiled this interesting timeline, highlighting some of the most important moments in the history of photography: 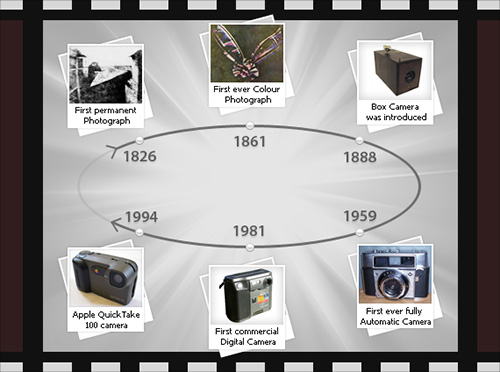 1826 – Nicephore Niepce took the first permanent photograph in history. Although there may have been other photographs taken during this time, the photograph of the exterior of his home is the oldest photo on record. He took the image using a camera obscura and a sheet of pewter coated with bitumen of Judea, which hardened permanently when exposed to light. Capturing the image took eight hours.

1839 – William Fox Talbot invents the positive/negative process. Although essentially a negative photograph, which he dubbed as the “photogenic drawing process”, he streamlined the process a year later and renamed it the calotype. This effect remains popular today.

1861 – Renowned physicist and mathematician James Clerk Maxwell took the first ever first colour photograph. He created the image of a tartan ribbon by photographing it three times through red, yellow and blue filters before combining them into one colour image.

1868 – Louis Arthur Ducos du Hauron of France became a pioneer in the field of colour photography. Using additive (red, green, blue) and subtractive (cyan, magenta, yellow) methods, he turned colour photography into an art form. He would go on to patent some of his methods, while one of his most famous, and earliest, photos is a landscape portrait of Southern France, taken by the subtractive method in 1877.

1887 – Gabriel Jonas Lippmann, a physicist and inventor, landed the Nobel Prize in 1908 for using the phenomenon of interference to reproduce colours on a photographic basis. This later became known as the Lippmann Plate.

1888 – The Kodak No. 1 Box camera was introduced, allowing the mass market to finally try their hand at photography. Once one hundred photos had been taken, owners would ship the camera back to Kodak and have the images printed at a price of $10.

1900 – If the No 1 Box introduced the average Joe, the introduction took things a step further. This camera made low-cost photography popular and introduced the world to the snapshot. This basic cardboard box camera offered simple controls and a price tag of just $1.

1923 – Doc Harold Edgerton introduced the xenon flash lamp and pioneered strobe photography. This paved the way for improved portrait pictures, as well as photographs in areas with little or no light.

1936 – The world was introduced to the first single-lens reflex (SLR) camera. This 35mm SLR camera was named Ihagee Kine-Exakta and made in Germany.

1948 – Edwin Land, who founded the Polaroid Corporation in 1937, released the instant film camera in this year. This device would become their most popular product line for decades to come.

1959 – There was a time when AGFA was close behind Kodak as a leader in the world of photography. It was at this point that the company introduced the first ever fully automatic camera, the Optima.

1972 – The rise of digital happened a lot earlier than many people realise. Texas Willis Adcock, a Texas Instruments engineer, actually created a design for a filmless camera and applied for a patent in 1972. Unfortunately, nobody knows if it ever came into existence.

1975 –Steven Sasson unveiled the first digital camera using CCD image sensor chips. This groundbreaking device took black and white (recorded onto a cassette tape) and offered a resolution of 0.01 megapixels. The first image ever captured on this prototype took 23 seconds to record.

1981 – Sony released the Mavica, the first commercially available digital camera. Although this was a revolutionary product in the photographic industry, it was actually digital video recorder that took freeze frames.

1986 – Leading photographic company, Kodak, brought out the first megapixel sensor, which was able to record 1.4 million pixels. By 1991, the company had created the first professional digital camera system (DCS), a Nikon F-3 which was targeted at photojournalists.

1994 – Only a select few were able to enjoy digital technology up until now. Apple introduced the Apple QuickTake 100 camera in February 1994, a digital camera aimed at the average Joe which was able to work with a home computer. Others soon followed including the Kodak DC40, Casio QV-11 and the Sony Cyber-Shot.

2006 – Digital photography steadily edged out the use of a film camera, so much so that Polaroid announced that it was halting production on all of their instant film products.

2010 – Digital cameras are introduced monthly, if not weekly. Each with more advanced features, better quality picture quality and enough on camera space for thousands of images. To top it off, printing of images is quick, cheap and never wasteful as you select the images you want without have to deal with overexposed or dud images.

This guest post was written by Jason Acar. Jason is currently a content writer for MyCamera.co.za. He has extensive journalism experience and a keen interest in photography.