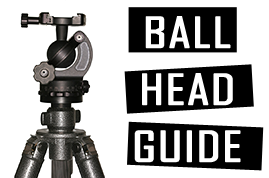 A tripod is not a single piece of equipment, but rather, two components joined together: the legs and the head. In this article, we’ll explore a specific type of tripod head called the ball head, or more formally the ball and socket head.

A tripod head, in general, is the piece of equipment that sits between your camera and the tripod legs. It is responsible for providing an adjustable yet rigid connection. It’s also the part of the tripod that you, the photographer, will have the most interaction with.

A recent poll here on Epic Edits indicates that 60% of you are ball head fans when it comes to your tripod heads. But for those of you who aren’t on board already, read on!

WHAT IS A BALL HEAD?

A ball head is a ball and socket joint that allows rotation about a single point in all directions. They are typically more compact than a traditional pan/tilt head or other forms of tripod heads because they only require a single mechanism for locking the motion. But rather than try to describe how a ball head works, I found this video that does a decent job at showing how they work and how they move.

The ball head in this video is equipped with more features than you might find on some other heads. Panning capabilities and quick release mounts are not inherently available on all models of ball heads. For further reading on ball heads, tripod heads, and tripods in general, see the following articles: Tripod Heads 101 and Choosing a Tripod or Monopod.

WHAT ARE THE ADVANTAGES?

One of the major advantages of using a ball head is the simple operation it provides. A single knob is faster and easier to operate than multiple handles and levers. While one hand takes care of the knob, the other can be on the camera and positioning it as you look through the viewfinder. When you find that spot you’re looking for, give it a twist and away you go.

In addition to the simple activation of controls, the motion provided is equally elegant and simple — you might even say intuitive. A full range of rotation means there are no limits to which direction you can point the camera, and the motion feels quite natural and uninhibited. Your own hips and shoulders work on the same basis as the ball head: the ball and socket joint.

But besides the ergonomics and ease of use of the ball head, they’re also generally more compact than a pan head. There are no adjustment arms that hang off the head, and the single socket can be designed to occupy much less space than three separate hinge joints.

Plus they look cool.

WHAT ARE THE DISADVANTAGES?

Now of course there are downsides to every good thing out there. In the case of the ball head, it’s mainly the price. For a ball head of equal quality and capability to a pan head, the ball head will almost always cost more money. The main reason they cost more is because that precision ball and socket joint is much more difficult and expensive to manufacture than three decent clutched hinges.

The other downside of the ball head is with the strength and precision. Ball heads that are comparable in price to pan heads will typically support less weight (important for folks with big heavy lenses). The motion and the ability to stop the motion will also be of lower quality and capability than the pan head. It’s not to say that you can’t get a ball head to carry a heavy load with smooth operation — it’s just going to cost more.

Another disadvantage of some ball heads is in the lack of a panning mechanism. Higher end models will have this capability, but many will not (or they’ll do it poorly). And if they do have a panning option, the control for this motion will almost always be a second knob, lever, or button. So if you’re into serious panorama shooting, you might want to hang on to your pan head (or even a specialized panorama head).

WHAT FEATURES SHOULD I LOOK FOR?

If you’ve ever shopped for any kind of photography equipment, you’ll know that there are enough options out there to drive you nuts. Things are only more difficult if you don’t know what features you should be paying attention to. So if you’re looking to purchase a ball head, here are some things you ought to consider.

WHICH BALL HEADS ARE SUGGESTED?

Like I mentioned before, there are a ton of ball heads out there and many of them look very similar. It’s hard to know where to start sometimes. Here are a few ball heads with decent reviews that you might use as a starting point. I should also mention that I’ve only owned one of the following ball heads, so this isn’t a personal review and I’m not in a position to say ball head “A” is much better than ball head “B” — you’ll still need to conduct your own research. I’ve included a mixture of heavy duty and lightweight ball heads, and a few specialized ball heads with unique features. (The following items may not be visible to feed readers.)

In the end, a ball head isn’t for everyone. If you’re unsure whether you’ll like this type of tripod head, find a local shop that carries one — try it out. And those of you who are already using ball heads, do you have any additional advice regarding these things?