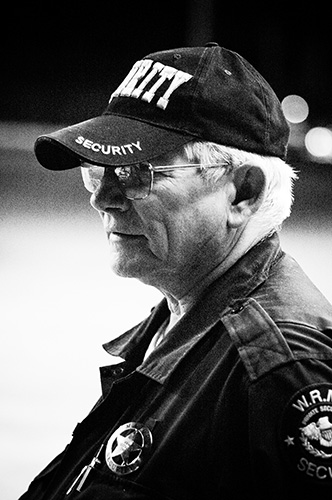 I encountered Dino at a local gas station in Del Mar Heights late this evening. I was topping off the truck and I still needed a photo for the December Challenge, so I figured who would be safer to approach at a dark gas station at almost midnight than the security guy? I let him know about the project and he happily agreed to a photo.

Dino is originally from Romania, and he currently works as a security officer. He’s been in the business for the last 27 years and he says he loves his job. It also turns out that Dino is a bit of a photographer himself. He’s got a Canon dSLR that he typically shoots with, but he also has a few really neat cameras that his parents left him. One is an older Hasseblad, and the other is a Leica rangefinder that his Mother picked up in 1936 (I’m guessing it’s a Leica II). He said that the Leica is still in near perfect condition and he uses it from time to time.

We talked about so many things in front of that gas station for about 45 minutes — I’ll bet he’s got a ton of other stories and life-lessons to share. He had all kinds of stuff to talk about… lived in New York, retired from the army, four kids (I’m pretty sure on that number anyway). But the biggest thing I got from him was that he really enjoyed his job and he loved to talk about his experiences with it.