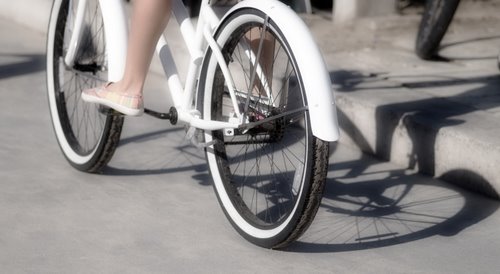 I was in Pacific Beach a few weeks back taking some shots of whatever I could find. I was supposed to be focusing on minimalism for my October Challenge, but I couldn't help myself with this one. There's a path that runs along the back of the beach area that a lot of people use for walking and riding bikes, and I was sitting on the divider between it and the sand talking on the phone with my wife. I saw this beach cruiser coming and I had to grab a couple shots as it went by. And in case you're wondering, the composition was intentional. I don't know why, but I had been wanting to take a shot like this all day… so I finally did.

In the end, it's pretty much what I had in mind. I wanted to show something kind of dreamy and care-free while capturing part of the culture in the Southern California beach towns.