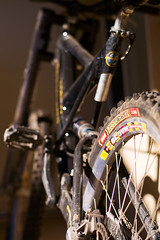 Mountain biking has been another one of my passionate hobbies (though I've drifted away from it in the last few years). But now that I'm back home in north Idaho, I'm anxious to get back in the saddle. In fact, this last weekend, I spent some time building a bike that has been long overdue.

I'm the type of rider who refuses to buy a complete bike. I like to do my research and buy each component individually, thus ending up with a custom bike that meets my wants/needs and falls within my budget. As I was piecing my bike together, I thought “why aren't cameras more like bicycles?” Meaning, why aren't more components on a camera interchangeable and replaceable?

Sure, the modern dSLR has interchangeable lenses, flashes, memory cards, and batteries… but that's about it. You want more megapixels? How about a larger LCD? A different lens mount, perhaps? Your only choice is to buy a completely new camera body. And while you might get most of the features you want in that new body, there always seems to be something you liked better on the old body.

Leaving reality behind for a moment (we'll come back to it in a second), wouldn't it be nice to have a truly modular camera? Starting with a frame or skeleton, you could add components to build your camera from the ground up. This sensor, that lens mount, this LCD, that control panel, this processor/computer, that hotshoe, this memory card slot, that viewfinder, etc. Essentially, you could replace only pieces of the camera that are broken or outdated. And if you have some cash to burn, why not go for some upgrades?

Now back to reality. Modern digital cameras are highly complex electro-optical-mechanical systems packed into a very tiny box. Modularizing key components would probably take some extra space and increase overall cost for the camera. Not to mention that interfaces and package dimensions would need to be standardized to allow for the swapping of parts — this would probably be impossible to achieve between different camera manufacturers.

While it may be easy to sit back and compare cameras to bicycles, the truth of the matter is that bicycles are relatively simple mechanical systems in very large packages. It may certainly be possible to create modular cameras, but the general market for such a thing is small.

As a matter of fact, there are a few modular camera systems out there. RED cameras are built on this concept, but they're very expensive (and intended for shooting cinema rather than stills). The Ricoh GXR is sorta modular, but not entirely. In doing some research, I also found Alpha brand cameras that are built for modular exchange of parts. And of course, many large format film cameras are quite modular (which makes sense based on their size alone).

Does anybody else out there wish that cameras were more modular? Are you the type of photographer that would build something from the ground up rather than buy it off the shelf in final form? What other problems do modular cameras face?