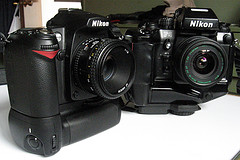 Earlier this month, I wrote a post on the film blog about the different types of film photographers and ran a poll asking the readers to categorize themselves. It was no surprise that we had zero “film haters” chime in ;).

I want to take a step back, look at the question in a broader sense, and open it up to a wider audience (you guys). I'm fascinated by the film vs digital thing, and I see a lot of people doing both (but that could just be the crowd that I associate with). So what I want to learn here, is what percentage of the Epic Edits readers shoot film, digital, or both.

For those who know me even a little bit, you know that “I Do Both!” Give it a few years and I might get rid of my digital stuff though… j/k, calm down.

I've been noticing a renewed interest in film photography over the last year or two, but I'm wondering if it's just me or if it's really happening. What do you guys think? Are people coming back to it? Or am I delusional?

Also, don't forget to check the results from the last poll: How often do you shoot? Looks like we have a pretty good mix of votes.