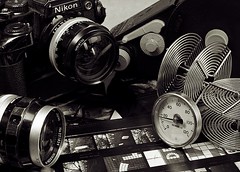 Most of you know that I'm a big fan of film photography and I've posted a few articles here on the blog. I started with digital, but I've been doing the film thing for about the last 2 years now. At this point, I'm fairly comfortable with discussing most film photography topics from shooting to printing and everything in between.

The poll this time around will be another open-ended question because I'd like to get some open-ended feedback from you guys. I know that quite a few of you are film buffs and/or upcoming film enthusiasts, and I know that there are a lot of questions out there on the topic. So open it up and ask away! What film photography topics, tips, techniques, and methods would you like to learn more about?

WHAT DO YOU WANT TO KNOW ABOUT FILM PHOTOGRAPHY? REALLY… ANYTHING!

Seriously… don't be shy and don't blow it off. I can't answer if you don't ask. And for those of you interested in film, stay tuned for a BIG announcement next week.