We're basically building on our basic understanding of the histogram and our knowledge of linear curve adjustments to take the next step into nonlinear adjustments (the curvy curves).

What I'm going to show here are some very basic curves at each extreme. The single bend and double bend curves are most commonly used during post-processing, but these are not the only options. Curves can have a large number of set points, bends, and inflections — it's just not feasible to cover every possibility in an article like this.

The simplest form of a nonlinear curve is accomplished by moving a mid-tone location toward the upper left or lower right corner, forming a basic arc with a single bend. Essentially, your black and white points remain fixed while your mid-tones become lighter or darker (aka: brightness). Also note that one end of your tones will take on more contrast while the other end will lose contrast due to the change in slope of the curve (remember: vertical = high contrast, horizontal = low contrast).

This can be used to brighten or darken the overall image if you want to maintain your highlights and shadows at their current values.

Also known as the “S-Curve”, this curve manipulation pushes one section of tones brighter and another section of tones darker (aka: contrast). Again, you can maintain your black and white points, but you also maintain some middle tone where the curve crosses the diagonal. On the note of contrast again, be aware that you will sacrifice contrast in one area to gain it in another.

This can be used to raise or lower the contrast of the overall image with a focus on the mid-tone areas. The bright/dark tone changes of the highlights/shadows are amplified by the mid-tone slope change — so it doesn't take much to really change the contrast.

Using the example image above (middle of series), here's one possible curve that combines linear, single bend, and double bend curves. Keep in mind that I haven't applied any basic adjustments and what you're seeing is pure curves from an unprocessed raw file (except for the b/w conversion). 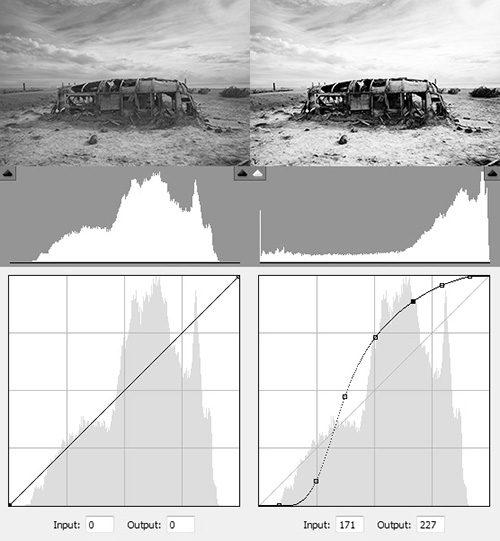 As you work with curves, you'll noticed that they sometimes have a mind of their own. Extra points will help shape the curve and provide you with the ability to make the adjustments you want. On that same note, too many set points can lead to choppy and lumpy curves. Non-smooth transitions generally begin to produce strange contrast artifacts that are easily seen in the image.

For you curves experts out there, what other tips and advice would you add to this discussion? How are you guys using curves to enhance your images?