Just wanted to give a quick update on my previous post where I asked you Southern California folks help out with the model shoot I was asked to do for a local San Diego company: Green Man T-Shirts. When I posted it, I was hoping to have a good response, but maybe the “no pay” thing was a turn-off.

I did get one response from a fellow by the name of Michael Walborn and he's actually a perfect match for this event! Be sure to check out his ModelMayhem profile and his Flickr photos. Not only does he have experience in the studio and photographing models, but he has experience in the same studio that we'll be using! This is awesome news and I'm really looking forward to learning the ropes with him. 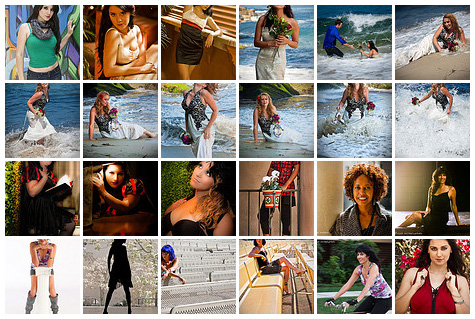 Definitely check out Michael's stuff — I owe him a big “thank you” for jumping in to help me out with this thing. I also owe Oscar Medina a “thank you” for referring him to my previous post. You see, Oscar is my local San Diego printer and Michael is a fellow customer/contact of his — we both also have photos listed on two of Oscar's other websites: San Diego Artists and Artist Direct.

THOUGHTS ON WORKING FOR “FREE”

As I said, maybe I didn't get a huge response on the call for photographers because I was asking people to basically work for free. The word “free” has become a bad word among photographers in recent years, mainly because of the various professional photographers and photography blogs preaching that you shouldn't give anything away for free as a photographer. If you do, you're devaluing the marketplace and doing a disservice to yourself and your fellow photographers. While most of these discussions have been aimed at licensing of existing photos (which I generally agree with), the idea of not working for free for any reason whatsoever seems to have attached itself by association. This is a bad outlook to have if you ask me.

I'm not going to preach on this topic of working for free under the right circumstances, mostly because other have made much better arguments than I ever could (see the articles from David Hobby and Chase Jarvis).

CHASE JARVIS: WILL WORK FOR FREE?

For this Green Man T-Shirt thing, it's a no-brainer on my part. The company is a local startup, they're “green”, they donate 25% of their proceeds to charity, they're enthusiastic, I'm in a position to learn a great deal from this experience, and I need to get out and shoot more often. I have everything to gain from this except for a few dollars (which I wouldn't be able to charge anyway because of my inexperience). And the only reason I can do this is because Michael has agreed to help out.

I can't speak for Michael, but I would guess (and this is only a guess) that he's also interested in gaining more experience, adding to his portfolio, helping out a local company, and having a good time. Whatever his motives, I'm very grateful that he jumped in and offered his time and experience (and I'm going to repay him by providing whatever exposure I can).

So next time you have an opportunity to “work for free” as a photographer, maybe think twice about it before dismissing the idea. In the long run, you just might gain more than you sacrificed. The end of our story with Green Man T-Shirts here in San Diego has yet to play out, but I'm very enthusiastic about what could come of it. I'll update you guys after our session this March.

What say you? Is working for “free” a bad thing? Would you ever consider doing it yourself? And under what circumstances?