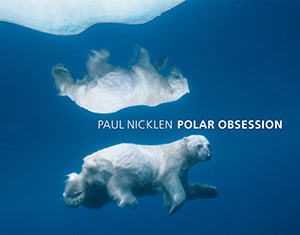 Nature and wildlife photos are generally pleasing to the eye and viewed with great interest from the masses. The interest is even greater when the photos show remote locations and/or elusive animals that we typically don’t see in real life or in photos. Earth’s polar regions are perfect examples of such imagery.

Polar Obsession, by Paul Nicklen, is a stunning collection of photos from the northern and southern polar regions. But these are more than just pretty pictures of the landscape or some distant shots of animals through a 500mm lens — these are up close and intimate views of the animals, their behaviors, and the delicate environment they live in. Paul specializes in photographing the Arctic and Antarctica with an emphasis on underwater photography, and it would seem that no location is out of his reach.

Although the photos presented in Polar Obsession are quite beautiful on many levels, they convey a much heavier message. These fragile environments are changing rapidly, and terrible consequences to the animal inhabitants have already begun. Through his work as a photojournalist, Paul conveys the truth about the polar regions in a way that I’ve never seen before. His passion and drive are intoxicating and his message is impossible to ignore.

See the end of this post for a chance to win a free copy of the book.

Polar Obsession (ISBN 978-1-4262-0511-8) can be purchased directly from National Geographic or through Amazon.com

Polar Obsession is a hardcover book containing 240 pages of text and photos (150 photos total). The book is quite large, measuring nearly 14 inches wide and 11 inches tall — definitely a lap book. I do like the size and shape of the book though, big enough to really make the photos come to life (and many of them are full bleed). 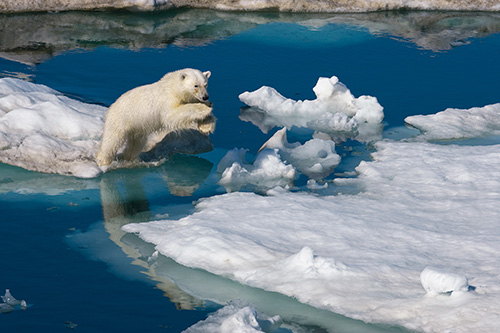 The book is broken into two major sections, preceded by introductory material: Arctic and Antarctica. The introduction gives you some important background information on Paul, sets the tone for the environmental message, and gives you a sampling of his portfolio. The Arctic chapters include “Ice and the Cycle of Life”, “Last of the Unicorns”, and “Svalbard: Polar Paradise”. The Antarctica chapters include “Leopard Seals: An Intimate Encounter” and “South Georgia: The Land of Kings and Elephants”. Each chapter begins with several pages of text that relate to the images. 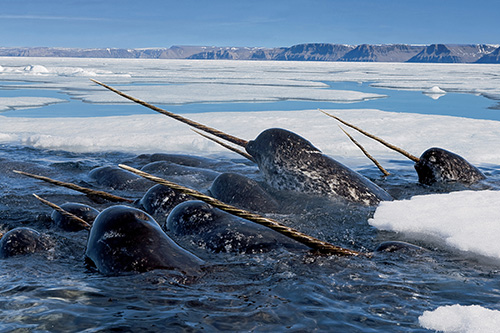 When I get any new book the first thing I do is flip through the pages to scan the photos. Upon doing that with Polar Obsession I thought “Hey, great looking photos! I wonder what all that text is for.” Once I started reading about Paul and his many adventures on the ice and in the water, the photos completely changed in my eyes. The surface beauty melted away and I began to appreciate them on a far deeper level… what they stand for, what they say about the environment, and what they say about humans in general.

Another major part of the book is the knowledge conveyed by Paul about the various animal species he photographs. Many of them are clouded with misconceptions and myths, but Paul reveals the truth about these animals and the places they live. The views presented come from his life experience and his many close encounters with the animals. 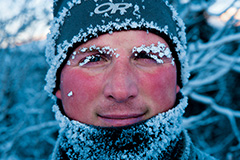 Paul Nicklen is an interesting individual. He mostly grew up in a small Inuit community on Baffin Island in the Canadian Arctic, spending his childhood observing nature, traveling the land, and learning the ways of the Inuit people. During this time, he developed a strong connection with the animals and their environment — a connection that most of us will never experience. When it came time for college, he attended the University of Victoria, British Columbia in pursuit of a degree in marine biology. It was during his final years of study that he made the decision to do something amazing with his life. Paul worked his butt off to acquire his gear and drew up a plan to share his passion of the polar regions with the world.

Paul’s dream has taken him to some of the most extreme and remote corners of the Earth, and I’m confident that he loves every minute of it. This is a man who, as a child, would get excited about blizzards because it meant he could go lay in the snow and let himself be buried by the weather. This is also a man who puts his own life at risk so he can capture images that nobody else will. Truly an extraordinary individual who cares about the life on our planet more than most people can comprehend. 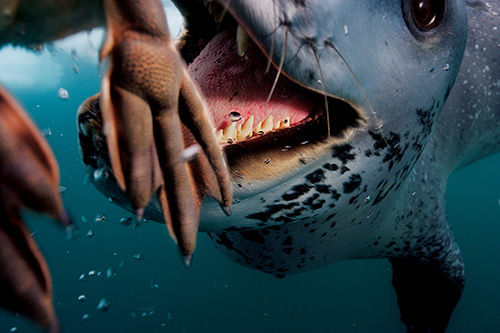 I had the great pleasure to speak with Paul for about 30 minutes on various topics, and he came across as very down-to-Earth. He also came across as an extremely passionate individual when it comes to the well-being of our planet and all the life contained within. Paul is one of those people who dedicate their life to a noble cause — this stuff is his life. From his experience, the polar regions are warming 2-3 times faster than the rest of the Earth, and this means big changes in the very near future.

Some of our discussion revolved around what we can do to “right the wrongs of our past” and make a better world for tomorrow. I’m not going to quote Paul directly (mostly because I can’t write that fast while having a conversation), but he basically wishes that we (the human population) would wake up and realize what’s happening and do something about it. The actions required to make a major difference are far beyond changing our light bulbs and driving hybrid cars — we need a serious shift in our priorities. Paul believes (and I agree with him), that we need to teach our children to “get back into nature” and start caring more about our impact on this planet. 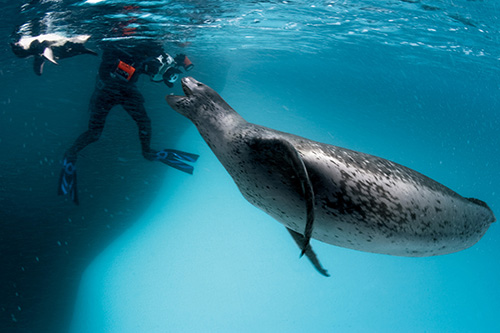 We also chatted about pure photography stuff… and as photographers, we’re all interested in such things! He put a gear list at the end of the book, and it’s freakin’ crazy! I can’t even begin to describe it. I asked him about the film vs digital thing… he’s 110% digital at this point. This makes sense when you think about changing film underwater — it doesn’t happen! I also popped the question “Do you shoot for fun?” The answer… nope. I figured this would be the case with Paul (as is the case with some other professional photographers). The camera is merely a tool that he uses to pursue his real passion. He’s obviously an expert at using that tool, but his true interest is saving the world.

I can’t remember for the life of me whether this was in the book or part of our conversation, but it was profoundly eye-opening. Paul said something along the lines of “we need to move from being consumers of the planet’s resources, to being it’s protectors.” This made a ton of sense to me — as the dominant species of Earth, we should be protecting our planet rather than destroying it. We have the technology and the ability — why aren’t we doing it?

If you want to see more of Paul’s work, visit his website at paulnicklen.com

I’ve only seen a small number of books that changed my way of thinking at a very basic level. This book was one of them. At a glance — beautiful photos. Upon deeper inspection — an emotional plea to the importance of our role on Earth. Definitely more than a simple coffee table book. 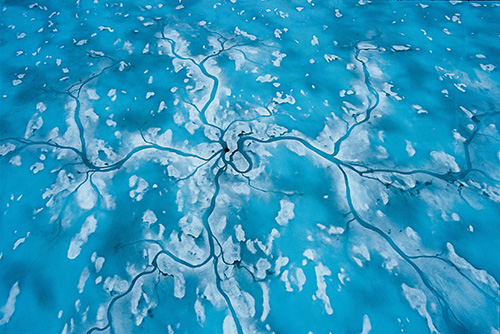 Honestly, I would recommend this book to anybody — it can be enjoyed by both child and adult. Not only that, the photos contained within may be some of the last of their kind. The global climate is changing fast and we’re on the brink of losing many species found in these polar regions. Paul Nicklen is a name you’ll hear again, as I’m certain he will continue to document and fight for these animals (in addition to other struggling species all around the world).

Again, Polar Obsession (ISBN 978-1-4262-0511-8) can be purchased directly from National Geographic or through Amazon.com

As always, the folks at National Geographic have agreed to handing out a few free copies of the book (thanks guys!). So what’s the requirement this time around? A contest, of course! We have two copies of the book to hand out, and we’ll have two methods for acquiring the books. You can do one of the following:

1) Submit a photo and/or link to a photo you’ve taken of an animal and/or landscape of a polar region. The photo must be your own, and it’s got to be pretty damn close to the Arctic or Antarctic Circle. Bonus points for supplemental descriptions.

2) Submit a Flickr Gallery of photos from the polar regions. Definitely a good option for those of us who haven’t been too far north (or south). Curate a gallery and pop the link in the comments below. Bonus points for supplemental thoughts within the gallery and/or comment.

OK, so get your entries in soon! I’ll choose and announce the winners on (or near) November 23, 2009 — one winner for a personal photo, and one for a gallery. If, for some reason, we happen to have no entries from one of the categories, I’ll choose two winners from the category that has entries.

Oh… and be sure to say “hi” to Paul — there’s a very good chance that he’ll be reading this review and the comments. This guy is a hero, so let him know how awesome he is!!!

[UPDATE 11/16/09] Thanks John for pointing out this great video on YouTube: