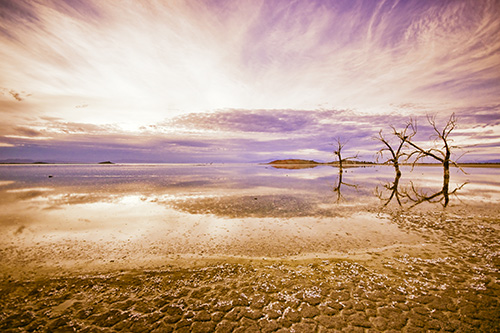 This photo was taken over at Salton Sea on the way to the Sonny Bono Wildlife Refuge at the south end of the lake. The three dead oak trees in the photo are somewhat of an icon for the area, and I've seen many photos of them before. I just so happened to arrive at this location a few minutes prior to sunset and the clouds on display were quite amazing. Shooting with my wide angle lens gave me the opportunity to catch the great textures in the ground along with the clouds in the sky.

I took several shots from this location and perspective, but I liked this one the best. I think that the strong symmetry right at center frame works well for this photo, and the difference in scenery between top and bottom frame helps to break things up. Looking back now, I probably would have shot at f/8 rather than f/5.6 to get a little better DOF and sharpness. And a graduated ND filter would have produced a much more balanced exposure, resulting in higher quality shadows and highlights. But… too late now! Maybe next time.

This image did fairly well on Flickr recently, probably because of the extreme colors presented. Above, you can see my workflow from start to finish. And below, you can read how I processed the image using Adobe Camera Raw (all of which can also be done with Lightroom). The reason for the crazy colors is because I was trying to reproduce a cross processed effect similar to that of Velvia 100 slide film. I don't know that I made my goal, but I'm not too disappointed with the results of this one.

So there you go! If you have ACR or Lightroom, try out some of these settings and see what you can come up with. It's always fun to experiment with these things.

In addition to the settings above, I applied sharpening and noise reduction as needed.