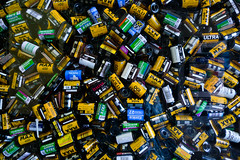 I started shooting film right around April of 2008, and here we are a year later! At first, I basically bought one of everything and just tried all the different films available to me. Over time, I started leaning toward certain brands and even specific films. Now, I’m fairly picky about what I shoot — though I’m always open to trying out new films (or at least new to me).

Also in the last year, more and more people are getting into film and asking me which film to use. Of course, that kind of thing is dependent on what you’re shooting, which camera you’re using, what the light is like, what kind of mood you’re going for, and personal preference. But if you’re completely new to film photography, it’s nice to have some advice to start with. So here are 11 of my favorite films after a year of shooting.

Black and white is definitely my favorite when it comes to film. Each film captures the scene a bit differently at varying levels of contrast, dynamic range, and tone representation. Here are five of my favorites.

Though black and white is my favorite, color is quickly growing on me. Color film usually renders a scene in a very different fashion than a typical digital image. Like black and white films, the various color films have differing levels of saturation, contrast, and grain. Here are 3 of my favorites.

I don’t usually shoot slide film because it’s expensive to buy and develop, and it tends to be very finicky about exposure. But the stuff is great for cross processing! Here are 3 of my favorites.

Drop us a comment and tell us what your favorite films are, and let us know why! Feel free to leave photos in the comments to back up your comments.