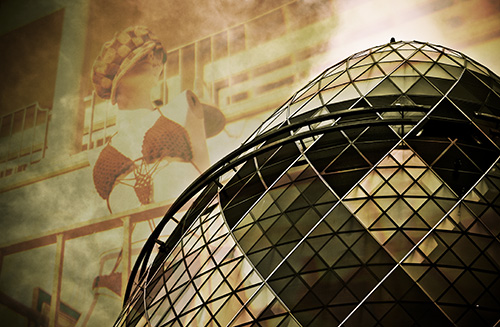 This photo is a joint effort between myself and Phill Price. He’s running an “Edit My Photo” project (see details here) and I decided to jump in. Over the last year or two, several of these projects have been hosted by various photography bloggers, including myself. If you want to view the results of these projects (all three of which I also participated in) you can visit: Brian Auer, Rich Legg, and Ryan Goodman. I think it would be cool if another blogger picked up the project in a few months!

OK, so on with the photo… I really struggled with this one. The original image is a bit on the minimalist side of things, so it was hard to get creative at first. Not a ton of colors to tweak, strong simple shapes and lines — I ended up getting quite frustrated that I couldn’t come up with something more unique. So I dug a little deeper and for some reason I had the notion to do a faked-in double-exposure type of thing. Now, this isn’t something I typically do (actually, I don’t know that I’ve ever done it with my photos), so I fumbled around with it for a while until I got something that looked interesting to me. Read below for more on my post processing.

And the title? It seemed suiting considering that the two images used were about as opposite as humanly possible. Phill’s was simple, clean, geometric, shot in London, and with a digital camera equipped with nice glass. Mine was busy, messy, organic (that’s a hemp bikini for crying out loud!), shot in California’s Venice Beach, and with a film camera equipped with a crappy plastic lens. But hey, they look good together!