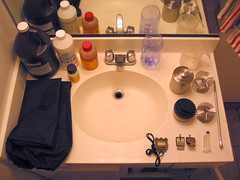 The intent of this article is to present a list of one-time expenses for developing your own black & white film. I would guess that many people shy away from film photography because of the cost or difficulty. And I agree that it can get quite expensive if you have somebody else develop your film (if you can manage to find them, especially b/w).

But film photography doesn't have to be expensive. We've already shown that there are a huge number of film cameras out there for under $50, and I wanted to see if I could put together a list of film developing supplies for the same price tag. After a few minutes of research, whad'ya know? Again, for under $50, we can put together a set of black and white film developing equipment. So let's dig in!

OK, so those are the absolute minimum equipment requirements for developing your own black & white film. There are definitely some other items that will make your life easier, but those things aren't always necessary. Again, these things above are the one-time equipment costs. Immediately below, you'll find a list of consumable items that you'll have to buy up-front and periodically throughout your film developing adventures.

* Added for clarification based on reader comments

Remember, these are things that you'll use-up over and over again (in addition to film). They're actually pretty cheap, but you have to remember to keep them stocked so you don't run out and inconvenience yourself. In addition to these consumable items, I've got a list of “luxury” items below that might make your “film developing” life easier, but they aren't completely necessary (unless you're a film addict).

I could probably go on and on about all the other pieces of equipment that would make developing easier, but we'll cut it off right here. The point is, you can shoot and develop your own black and white film for a relatively inexpensive upfront cost. Operating costs beyond that are fairly minimal, with the actual film being the most expensive component.