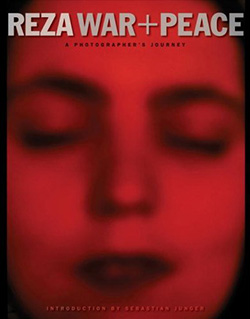 I’ll never get tired of saying how awesome National Geographic book publications are. They work with some of the most talented people around the world to produce amazing books and other publications. This book is no exception to the standard they’ve set.

Reza War and Peace is a book about many things, very deep and emotional. As the title suggests, the book is about war and peace. But it’s so much more than that too. This book is a testimony of humanity — at its worst, and at its best. It is comprised of 30 years of Reza’s work from across the world, and it contains some of the most incredible stories I never knew.

And just as the book is more than a collection of photos, Reza is more than a photographer or photojournalist. He’s a humanitarian, a story-teller, and a witness to the world. His conviction runs deep and this is his reality… his whole life.

Also, read on for a chance to win a free copy of the book.

Reza War and Peace can be purchased directly from National Geographic or through Amazon.com. 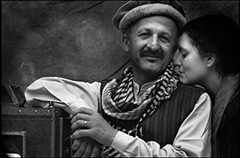 Reza Deghati was born and raised in Iran in the year 1952. In a short conversation I had with him he indicated that even at the young age of 6 or 7, he was captivated by pictures and paintings depicting people in need and he saw the power of such imagery. Once a teenager, he began using the camera to document the world around him — particularly those in need.

One particular instance he wrote about was in a local marketplace. An old woman was selling fish of poor quality. He was compelled to take her photo and learn her story. She told him that she would find fish left behind or on the ground from other vendors and try to sell them to people who had less money than she. The local law enforcement always had their eye out for her and she was forced to hand over part of her meager earnings. Reza told the story in his school paper, and thus began his journey into professional photojournalism. 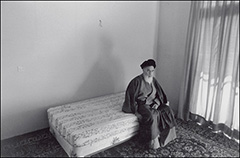 Once out of high school, Reza studied architecture at the University of Teheran. All the while, he captured the growing turmoil in his homeland (through the late 1970’s) and the uprising against the Shah and the revolution that surrounded it. His photography caused him to spend much time in jail, but he kept going. In 1981, Reza was forced to leave his country in exile.

Since that time, Reza has been a nomad traveling from one troubled culture to the next across the Middle East, Africa, and Asia. He has spent much time in Afghanistan and Egypt, not to mention dozens of other countries. 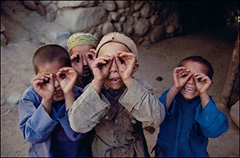 Reza is more than a photographer — he’s a true humanitarian. He doesn’t just photograph his subjects, he feels their pain and he gets involved. When I asked him if he considers himself more of a humanitarian or a photographer, he replied that the two labels are one in the same for him. This man is a true giver, dedicating his life and all of his material belongings to causes across the world. Reza honestly sees all the people of the world as only human beings — with no boundaries or segregations.

His hope is that people will react to his work. See his photos, read his stories, and be compelled to do something about it. Reza has been featured in many publications (including National Geographic) and received numerous awards and recognitions. All of which is well deserved.

When Reza is not out doing his work, he resides in his adopted country of France with his wife and two children. 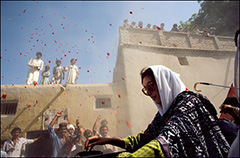 Reza War and Peace is a hardcover with 296 pages containing 200 images. The first thing you’ll notice about it is the sheer size of the book — it’s 11×14 inches! And you’ll notice that there are more pages than photos, which means some photos are sprawled across two pages at nearly 22″ wide. All of the images are accompanied by in-depth personal accounts and explanations from Reza.

When I first recieved the book, I flipped through the images to get an idea of what was in store for me. The photos were powerful to say the least, but I had no clue what that book would present to me once I read it.

Reza takes us on a journey through his life, sharing his encounters and adventures. The book not only covers the topic of war and conflict, but also the peace and awesome nature of the human soul (often in the wake or midst of terrible events). 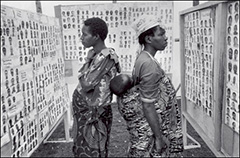 The major strength of the book is that stories are told to the point of evoking an emotional response from the reader. Photos sit alongside paragraphs of background information and inner thoughts from the photographer. Reza constantly reminds us that the people in his photos are human beings no different than you and I — the only difference is the situation they’ve been thrown into.

This little section is one account of my emotional response to the book: While reading the book, I’ll remember one moment for a very long time (maybe for the rest of my life). I happened to be upon the photo of the young girl from Sarajevo in 1993. Dressed in pink among a war torn environment, this little girl was selling her toys because of her situation. My 4 year old daughter came near me and saw the photo — she said “What is that girl doing with her toys?” To which I instinctively replied “She’s selling them.” — “Oh, she doesn’t want them anymore?” — I found myself unable to continue the conversation, realizing what I had gotten myself into. I finally found the voice to say “She wants them… but she has to sell them.” — “How come?” — Again, I couldn’t find the words. I closed the book, answered with a short “I don’t know”, and started to cry. 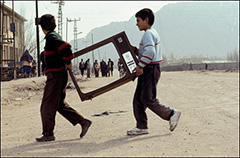 How could I possibly explain to my innocent and care-free little girl that not all kids are awarded the luxuries she has known all her life? How could I tell her that other kids are forced to sell their most prized possessions, hide from the violence of war, and arm themselves with guns to fight for their country and their lives? I couldn’t do it.

These types of emotions and inner thoughts are brought out through the entire book. As you peer upon the faces of the people in the photos, you realize that they are (or were) living in a reality so very different from your own, and yet, they are so very much the same as the rest of us. But Reza doesn’t just show us the sad moments — he also reminds us that people around the world are compassionate, giving, and full of life. He also shows us the beauty of these foreign cultures including their various traditions and ways of life. 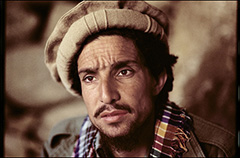 Reza goes above and beyond the call of duty — he puts his money where his mouth is. In 2001, Reza founded Aïna, an NGO whose name in Farsi means “mirror.” The name references a metaphorical mirror in which people searching for an identity destroyed by war can rediscover their culture. Aïna contributes to the emergence of civil society through actions in the area of education (particularly focusing on women and children), information and communication. Aïna promotes independent media development and cultural expression as a foundation of democracy.

This effort is a major focus for Reza, and he feels very strongly about promoting and teaching free and independent press as part of rebuilding a severely damaged civil society. If you would like to learn more about this humanitarian society, I urge you to visit their website and learn about how you can help others in need.

One lucky winner will receive a free copy of Reza War and Peace courtesy of National Geographic. All you have to do is leave a comment below and tell me so. If you want to be sure your comment doesn’t hit the spam bucket, be sure to use the word “Reza” in your comment. We’ll draw a random winner 5 days from now — December 8, 2008.

[UPDATE] The book winner has been announced. 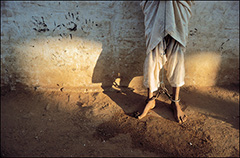 If you’re looking for a fun little coffee table book with lots of pretty pictures, this isn’t the book for you. But if you’re interested in experiencing the brutal and beautiful truths of our world, I would highly recommend this book. It’s an amazing book filled with amazing photos and stories, and it demands to be digested slowly and thoughtfully.

Reza gives not only a physical account of his travels, but an emotional one too. Be prepared to spend a lot of time studying this work, and be prepared to be emotionally torn.

I found this book very difficult to review because my write-up turned out 4 times longer than expected and I conveyed 1/4 of what I wanted to. My best advice is to pick up a copy for yourself and experience it firsthand.

Reza War and Peace can be purchased directly from National Geographic or through Amazon.com.