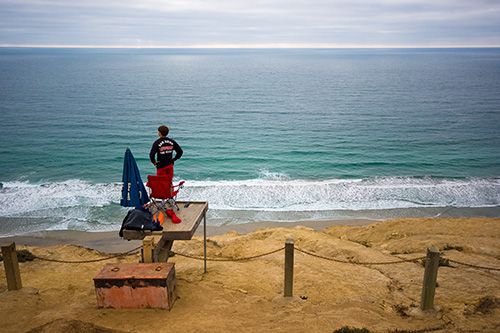 This photo was taken at a location very close to my home, and I've shot there many times. It's a gliderport near Torrey Pines State Park, sitting atop a 300-foot sand cliff overlooking Black's Beach. Just to the side of the gliderport, there's an area where you can walk right up to the point of steep decsent. This scary little lifeguard station sits perched right near the edge.

I shot using my wide angle lens to capture the vast openness of the scenery. The lifeguard was unaware that I was taking a photo of him, so his pose is quite natural. The lighting really sucked because it was heavy overcast and the sun was setting, but it worked out just fine.

All of the post-processing on this photo was done with Adobe Camera Raw 5. The intent wasn't to use extreme processing or fancy tricks to get an interesting outcome — it was only to make small adjustments where necessary to convey a true lifelike scene.

So that's it really — no Photoshop or local adjustments. Just a few small changes with the raw processor.