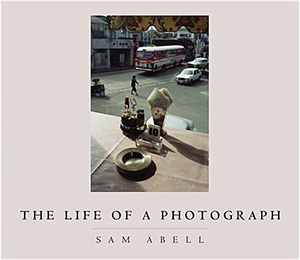 The folks at National Geographic approached me about reviewing an upcoming book from master photographer Sam Abell. The book, The Life of a Photograph, draws on 40 years of fieldwork from Sam and presents readers with a unique view of his work and the life of his photographs. I was also given the great pleasure of speaking with Sam on various topics surrounding his book and photography in general (and that alone would constitute a blog post). So this article is a bit of a mix between a book review and an interview.

The Life of a Photograph can be purchased directly from National Geographic or through Amazon.com.

DISCLAIMER: This is NOT a paid review, nor has it been reviewed or edited by the book’s author or publisher. The book was sent to me by the publisher free of charge. I am in no way affiliated with the book or the publisher of the book.

The book is a hearty 208 pages filled with approximately 200 color photos (except for one). Each of the 11 chapters contains thoughts and anecdotes from Sam as he attempts to answer the question “What gives a photograph a life?” Sam has identified photos that have lasted through time and talks about the reason for this. The book was carefully designed by Sam and his editor to show each photo in a most truthful manner. No images were cropped or otherwise post-processed (except to preserve the image, not fix it). The photos are given plenty of room to be enjoyed, and no image bleeds up to the edge of the page or crosses the gutter of the book. The presentation of his work was of the utmost importance to Sam during the creation of this book.

One unique aspect of the book that stands out is the “two views” presentation seen on many of the pages within. Often times, a particular scene is photographed from multiple perspectives and the publication editors (such as those from National Geographic) have the task of choosing one that works best. The other photos are never seen by readers. Sam brings these photos back into the picture and opens up a whole new aspect of his work by showing “two views” from the same scene. This method of presentation has the effect of slowing down the reader because the visual relationship introduced. It also puts the reader in the shoes of the photographer and the magazine editor. All in all, the “two views” presentation is an amazing part of this book.

Sam Abell began his journey into photography during his childhood mainly thanks to his Father, Thad S. Abell. One of his first life-changing experiences was brought on by a photo Sam took of his Dad with his Dad’s Rollei in 1960. The photo went on to win a prize in a national contest in 1961, and this experience helped to shape Sam’s future. He also mentions that one of his major life-changing experiences was reading a simple book on the Great Depression by Dorothea Lange in the mid-1960’s. He was inspired by Lange’s ability to document the world in an artistic fashion, and Sam’s own work through his career has followed the same example.

Sam began his career with National Geographic in 1967, and has since contributed nearly 40 years of work in the field. Along the way, Sam has published several books of his own (The Photographic Life, Stay This Moment, and Seeing Gardens) in addition to several best-selling National Geographic publications (Lewis & Clark: Voyage of Discovery and The Mississippi and the Making of a Nation: From the Louisiana Purchase to Today).

Today, Sam has turned more of his attention to teaching and educating via seminars across the country. He’s also spending a great deal of time editing past photos from his body of work for use in possible future publications. But he certainly hasn’t put down the camera, and he still enjoys taking on side projects in the field and photographing for his personal diary using black & white film (which is the medium that is most dear to this lifelong photographer).

Some books are flipped through, where the reader glances at the photos within. Others demand to be read and appreciated, but can still be knocked out in a single sitting. While few photography books require a detailed inspection and re-inspection over many sittings, The Life of a Photograph is definitely one of them.

I do believe that every photographer out there can learn much from this book while being inspired by its imagery. I would even go so far as to say that it’s changed the way I look at photos. Sam’s style is incredibly quiet and simple (just like his approach to photography). Upon first glance, the photos don’t appear to be incredibly special — but then they immediately draw you into them and hit you with a profound sense of interest and meaning.

I leave you with Sam’s favorite quote from the book, as he talks about that 1960 photograph of his father: “What I no longer remember is the day itself. It was in color wasn’t it? And the snow I knelt on to compose the picture in my dad’s Rollei — wasn’t it cold or wet or both? Surely we talked afterward — about trains or photography or what we’d do next. But all that has vanished. In its place is this photograph. The photograph is what I remember.”

The Life of a Photograph can be purchased directly from National Geographic or through Amazon.com.