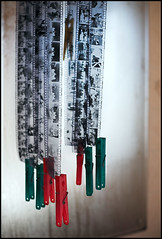 I recently got an email from a reader, Genaro Orengo, concerning workflow with film — specifically going from analog to digital. Here's that email:

I recently read your post “Diana+ Camera Review”. I am curious as to your workflow for getting the shots from the film to the computer. Is there anyway you can share that with me? I am interested in shooting with the Diana, but am a little uninformed when it comes to medium format film.

And my quick response:

I get the film developed at a local photography store — most places will be able to process 120 format film (it's still pretty standard stuff). Actually, I should say that most places will do C-41 (color negative) processing of 120 film. Slide film and b/w film are a little harder to find developers for. I just have them “develop only” — meaning no prints and no cuts. Then I cut them into the appropriate lengths and run them through my scanner (CanoScan 8400F) as full resolution TIF files. Then I just treat those files like RAW files and process them through Bridge/ACR or Photoshop if needed. If you don't have a scanner (and if you don't want to invest in one), most places that develop film also offer film scanning. The resolution will be somewhat low, but certainly large enough for web display. So really, you shouldn't shy away from 120 format film just because it's “medium format”. You just need to find a place that has the right equipment to handle it. Call around and ask them if they can develop 120 film, if they can process E-6 or b/w, if they do cross processing (E-6 as C-41), if they offer film scanning, and at what resolution.

But I wanted to expand on this topic and broaden the scope to finding a film developer that will suit your needs.

QUESTIONS TO ASK THE DEVELOPER

Once you locate some local places that claim to develop film (by Google Maps, Yellow Pages, etc), you'll want to call around and find out if they can do what you need. Here are some things to ask potential film developers, depending on your current or future needs.

I hope this helps address some questions that others may have about getting started with film photography. It's really not scary, expensive, or difficult. Find yourself a knowledgeable film developer and they'll take care of you.

I ended up finding a great place just a few miles from my house. The guys at Foto Finish Digital can handle all my 35mm, 120, and 110 format films. They even do black & white and small quantities of cross processing for me. They can enlarge up to something like 30″ on a few different types of paper (though I still need to try this out with them). I'm totally happy that I found such a cool place nearby.