This review is my own entry to my $50 Film Camera Project. With a price tag of $50, the Diana+ fits right in to the project requirements. This also happens to be the camera that Lomography is giving away to three lucky winners (along with 10 rolls of film from Ilford Photo). I purchased this camera (and yes, I bought it), not because it's a prize for the project, but because I've been wanting one for a while now. So let's get into this review… 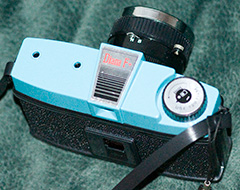 The shutter speed on the Diana+ has two settings: “Normal” and “Bulb”. The normal setting gives you about 1/60 seconds of exposure, while the bulb exposes for as long as you hold the shutter. The shutter release is located on the lens barrel along with the shutter mode adjustment. Bulb is intended to be used for pinhole photos or dimly lit situations (or whatever other reason you may want to use it for). 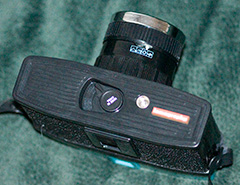 The aperture has four settings: “Sunny”, “Overcast”, “Cloudy”, and “Pinhole”. This setting can be adjusted on the bottom of the lens barrel. The indicated apertures are intended to be used with ISO400 film. Using a slower or faster film means that you'll have to compensate for the difference in exposure. The pinhole setting will require the use of the bulb shutter setting.

The focus is controlled by twisting the actual lens. It's kind of a guess, and the lens has three indicators: 1-2M, 2-4M, and 4M+. Since the camera is a viewfinder, you don't actually “see” the focus — just the framing. And speaking of framing, just watch out for that parallax error!

Other than that, there are a few other technical aspects to operating the camera: lens removal for pinhole photos, double exposures, panoramic exposures, setting bulb exposures for pinhole shots, etc. But in general, the camera is very easy to use because of the minimalistic approach to the camera controls. Watch out though — just because it's considered a “toy camera”, this doesn't mean that you don't have to think about what you're doing from time to time. You still have to set the exposure, compensate for lighting conditions and film speeds, watch out for parallax error, remember to wind the film, set your focus, and so on.

And the best part of this camera… no batteries! I've really come to embrace a camera that can operate without electricity. It's so liberating! 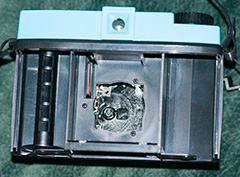 The most interesting aspect of the Diana+, to me, is the fact that it's so basic. Once you open it up to load the film, you basically see a big empty space. You think to yourself “where's all the… stuff?” I mean, there's really nothing to it. You've got a piece of plastic as a lens, then a plate with a few holes in it for the aperture, then a simple little mechanism for the shutter. Other than that, you've got a couple of spots to hold the film spools, and a little window to look through.

This is all very interesting because the camera also uses medium format film, which is typically used in higher-end cameras. But this coupling of simple technology with medium format film goes back to the days of the original Diana camera. Back then, 120 film was more of a standard than it is today because 35mm film hadn't become popular until the late 1960's. Prior to that, most cameras used 120 film or other formats that have basically been phased out.

For as basic as this camera is, you have to expect things to be a little different than your shiny new digital camera. Most of the stuff is easy to get adjusted to, but there are a few things that come off as a little quirky. Nothing that would prevent me from using the camera though. 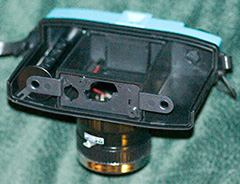 My biggest issue with the Diana+ is the film loading procedure. 120 film is sort of painful to load, but this camera doesn't make it any easier. The spool holders are pretty flimsy and don't really hold the spools in place before the back is placed on the camera. The spools have a tendency to pop out of place and thwart your efforts to get the film started. I'm sure this will get easier with experience, but it's pretty frustrating when you spend 5 to 10 minutes loading a roll of film.

The other thing that got me was the viewfinder. Yes, I totally forgot about the parallax error. But I was also under the assumption that the viewfinder showed less of the scene than would be captured on the film. The opposite was true with my particular camera, and this caused me to crop out a few things on a couple of photos.

There's a certain amount of “letting loose” that occurs with this camera. Some of it probably results from the photos that most of us have seen from these cameras (or similar cameras such as the Holga). If you let it, the camera will allow you to take the mindset of “don't think, just shoot” — which is one of the mantras of Lomography (and I suggest you take a look at the 10 golden rules of Lomography to get a better feel for this stuff). This is also probably a result of knowing that you don't exactly have a Hasselblad in your hands — if your framing or focus is slightly wrong, who cares?!

I found myself “shooting from the hip”, trying double exposures, taking long exposures without a tripod, and not giving a crap about straight horizons. The photos won't come out completely perfect, so why shoot for perfection? You end up with heavy vignette, occasional light leaks, lens flare, and motion blur — and all this stuff adds to the mood of the photos produced. Without these things, Lomography just wouldn't be Lomography.

In conclusion, the Diana+ is a really awesome camera! It's so different than your typical digital camera, and it can really open your eyes to a completely new world. For $50, you can't beat it. I would definitely suggest this camera to any photographer wanting to get a little crazy with their stuff.

So here it is. I shot 3 rolls of film in my Diana+ one day after I got it in the mail. The project only calls for one roll of film to be posted, but I wanted to show how different the results could be with different types of film. I shot a roll of black and white (Ilford HP5 Plus, ISO400), a roll of color slide film cross processed (Kodak Ektachrome E100VS, ISO100), and a roll of color negative film (Expired Konica Centuria 100, ISO100 that The_Wolf_Brigade sent me). You can see the entire set on Flickr. Here are two of the best shots from each roll: 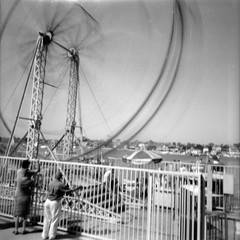 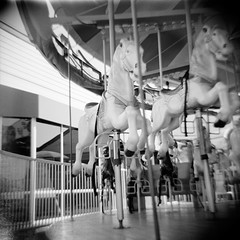 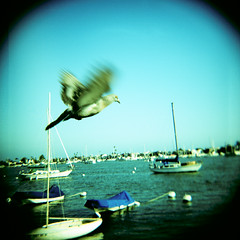 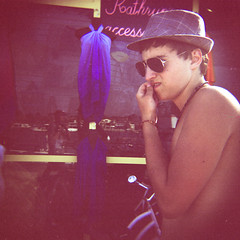 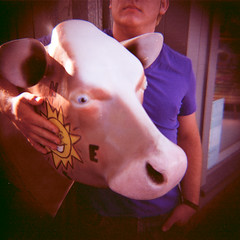 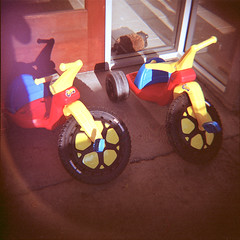 And here are the rest of the shots from each roll:

If you're still contemplating whether or not to participate in this project, think long and hard about what you might be passing up. Like I said, we're giving away one of these cameras plus ten rolls of film to three winners. And be sure to look back at the project announcement — I've added links to five project entries as good examples of what I'm looking for.

And you know what? The hardest part of shooting film… is deciding to shoot film. Once you get over that little hump, a whole new world opens up for you.