In a recent poll here on Epic Edits, I asked How Much Would You Pay for Photoshop? It's no surprise that the results indicate that Photoshop is priced way above a majority of the market willing to pay. This poll spawned from a previous Photoshop poll that told us 60% of Photoshop Users are Pirates! Many of the responses to that study mentioned the outrageous price Adobe charges for Photoshop and Photoshop upgrades.

The poll at hand used the basic Photoshop upgrade price as the basis for the question (which is $300 at first, then dropping to $200). Nearly 340 people responded to the poll, and the numbers came out with an interesting consistency. Click here for a capture of the raw poll numbers at the time this article was written. What you see below in the blue bar chart are numbers that have had some math applied to them in order to arrive at the green area graph (I'll explain below).

DISCLAIMER: This is an editorial review of a very open poll conducted on this website. I'm not claiming that any of this is 100% true or trustworthy — it's just an interesting concept and I'm only going by the numbers I've collected. 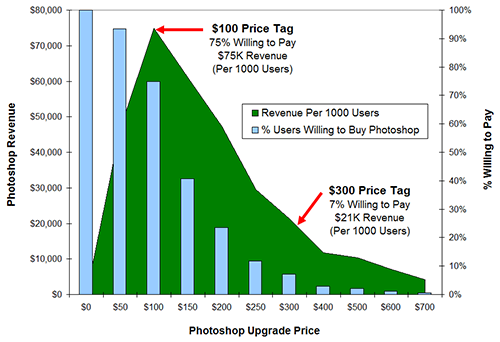 BREAKING DOWN THE NUMBERS

So the chart basically says that if Adobe decreases the price of Photoshop to 1/3 the current cost, they could increase their revenue by over 3 times! This is due to the fact that over 10 times the number of Photoshop users are willing to pay that lower price. More sales at a lower price can equal higher revenues. Let me explain the chart a little further.

I'm not claiming that I'm smarter or more business savvy than the folks at Adobe — I'm quite sure they know what they're doing. But we all know that Photoshop is one of the most heavily pirated pieces of software on the market, and most of us think that it's overpriced. I'm sure Adobe is aware of these things as well.

So why be stubborn with the price? If you could potentially increase your revenue by 3 fold just by lowering the price, why wouldn't you?

Would dropping the price of the software somehow “cheapen” it because of perceived value? I sure don't think so. Photoshop is a verb for crying out loud! “i.e. That photo is totally Photoshopped.” When your product name turns into a verb, it's a good sign that you own the market. A cheaper price tag wouldn't correlate to a cheaper quality.

IS LIGHTROOM THE ANSWER?

I find it really interesting that our poll indicates that the most revenue can be produced by a $100 price point for the software upgrade. Why so interesting? Because that's exactly the price of the Lightroom upgrade. Is Adobe well aware of this market trend and they're using it to set the price of Lightroom? Sure, it offers fewer features than Photoshop, but I'm guessing that people would still pay for it if the price were $150 or $200. If this were the case, they'd probably just be pushing more people to pirate the software rather than buy it (as is the case with Photoshop).

I'm actually aware of several photographers who pirated Photoshop in the past, but purchased Lightroom. And while I know that Lightroom will be pirated, I'm guess that it won't be as much as Photoshop now that the upgrade price has hit the market.

While Lightroom is certainly a cheaper alternative to Photoshop, they're different pieces of software. They each have their own use. It's hard to say if the numbers presented in this study would actually reflect purchasing habits of Photoshop users, given a lower price. But I think the trend would hold true — lower price would result in higher revenue for Adobe.

I'd love to see Photoshop offered at $100, but I don't think that's going to happen any time soon. What do you guys think: will we ever see lower prices on Photoshop?