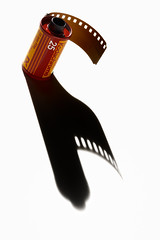 I finally started shooting film — and it's great! Seeing as how I've only shot digital in the past and I've been completely ignorant of film photography, I'm now finding myself uneducated about many aspects of film technologies.

One of my biggest unknowns has to do with the actual film — I have no idea which ones I should use or try. I walk into the photography shop and I felt like a kid at a candy store, except I've never had candy before. What did I do? I picked up about 10 rolls of different stuff… Ilford Delta, Ilford Pan F Plus, Ilford XP2, Kodak Ektachrome, Fujifilm Velvia, Fujifilm Superia, and a few others.

So in the poll this week, I'd like all you film people to sound off and tell us about your favorite film. I'm sure there are plenty of films I've never heard of or seen, and I'd like to have some indication of what is worth trying out. I've seeded the poll with a few films, so if you don't see yours in the list you can add it yourself. I expect the list could get pretty long, so check if yours is in there before you add another.