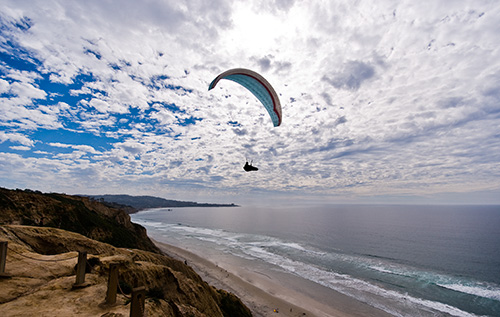 When the wind is just right, the skies above Black’s Beach team with para gliders and hang gliders. This particular shot was taken at a 10mm focal length (15mm full-frame equivalent) as I stood very near the edge of a 300 foot sand cliff above the Pacific Ocean. The gliders ride the updrafts as the wind comes off the ocean and shoots straight up along the face of the cliff. These thrill seekers can ride these winds for extended periods of time and never lose altitude. The Gliderport is located on the Torrey Pines State Reserve, nestled between the beach towns of La Jolla and Del Mar. La Jolla can be seen in the background of this photo as it extends out into the ocean to form a point. And those little dots on the sand below… those are people.

All of the following post-processing steps were done with Adobe Camera Raw — no Photoshop was used on this photo.