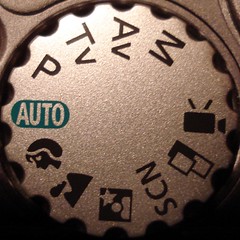 I don't think I've asked this one before, but I think I already know the answer… I think. At any rate, it should be interesting to get some actual poll results on the topic of camera modes. Most cameras (including some compact cameras) will give you the ability to shoot fully manual, aperture priority, shutter priority, program auto, fully auto, or some other defined auto preset (portrait, landscape, night, macro, action, etc.). So which is it for you? What's your favorite setting? 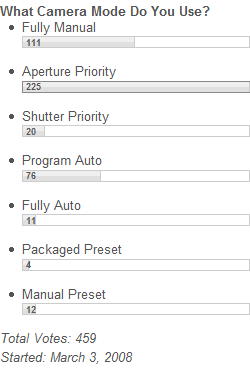 Also check out the results from the last poll on the topic of Film Experience. It's pretty crazy — over half of you USED TO shoot film, but no more. About 25% still shoot film occasionally, while only a handful prefer it to digital or shoot with film 100% of the time. Similarly, there are a small number of us who have either never shot film or have only tried it once or twice. Well… that's about to change for me. My Dad is sending his old manual SLR down to me and I'm pretty stoked to give it a shot.