Since Neil Creek started writing about Organization and Photo Management, I’ve been spending a lot of time evaluating my workflow practices. One of my major changes has been in my file format management. And Change is good. 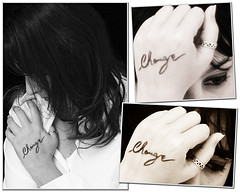 Photo by Sara Petagna [CC by]

Previously, I was shooting in RAW+JPEG. I’d use the JPEGs as a quick-view tool, and the RAW files were basically there in case I wanted to dig a little deeper and do some serious editing. This method sucks for several reasons: 1) it takes more space on your memory card, 2) it takes more space on your hard drive, and 3) the JPEGs that come out of the camera are absolutely terrible. I found out just how terrible they were by running a set of RAW files through Adobe Camera Raw (ACR) and comparing the results to the JPEG files straight out of the camera. Hands down, no comparison — the JPEG files out of the camera stink.

Here’s what I’m doing now. I shoot RAW only — no JPEGs whatsoever. When you use a piece of software like Adobe Bridge, Lightroom, or Aperture, you can view the RAW files just as easily as the JPEGs. I process the RAW files with ACR with very basic adjustments (most of them are auto adjustments for exposure and color), and I’ll usually process 100-200 images at once over a very short period of time. Occasionally I’ll have to do some tweaking on the white balance, but usually just for indoor shooting. At first, I was then saving all the adjusted RAW files as full-res JPEGs… but after a few times of doing that I was questioning my own methods. Why was I saving extra files that I didn’t need? I don’t use those JPEGs for anything, and after I adjust the RAW files with ACR, the adjustment settings are saved and the image looks the way I intended.

So now, each photo has only the adjusted RAW file and an optional Photoshop file if I choose to dive a little deeper into the photo editing. If I need a JPEG, I open up the RAW or PSD and make the JPEG I need. Same thing with TIFF files — there’s no point in having those extra files ready and waiting on the hard drive. If I need to upload a photo to Flickr, I open up the original document, resize accordingly, save it to a temporary folder as a JPEG, upload to Flickr, and delete the derivative file when I’m done. No extra baggage.

If you shoot and manage your photos in RAW format, take a look at your current methods of file management. Are you creating extra files that you don’t NEED? How much time and hard disk space are you wasting if you create all those JPEG and TIFF files to keep on-hand? Is there any advantage to having those derivative files in your archive?