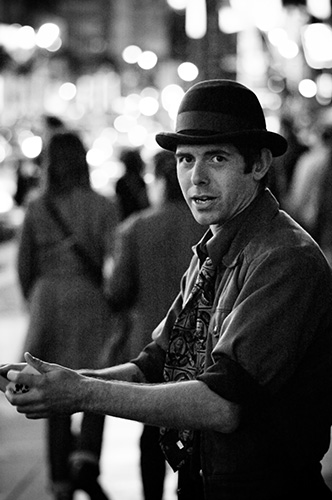 Daniel is a street performer (card magician) I encountered on Hollywood Blvd at the recent photowalk. I stopped to take a few shots of him, and he started giving me a hard time about it (as shown in this photo). I believe his words were "Sir, you're not being sneaky. I can see you taking pictures.” So I walked over to him to show him the shots and I told him I'd make him a star.

After that, we ended up having quite a conversation for about 15 or 20 minutes on various topics. I got the impression that he'd been to many places across the country including New York and Hawaii.

The most interesting topic of our conversation was his observations on how the weather effects the people on the streets. He said you can actually see a change in the way people act and react to things when the temperature changes or the wind picks up. I suppose that with a job such as his, you'd have plenty of time to analyze society as it passes you by on the sidewalk.

All in all, Daniel was a really nice guy and a great conversationalist. He seemed to be happy with his job, and his character suits it quite well. I think he's on MySpace, but I'm not certain that it's him. Here are a few other photos of him in action.